X
This site uses cookies to provide and improve your shopping experience. If you want to benefit from this improved service, please opt-in. Cookies Page.
Accept Cookies
Reidys BlogUncategorized10 Of The Most Influential Epiphone Players
Menu
Uncategorized

10 Of The Most Influential Epiphone Players

Whilst it’s true that Epiphone do offer more affordable versions of some Gibson models, many of them are legendary guitars in their own right. Epiphone was founded in the 19th Century and has been producing quality instruments ever since, with their products finding their way into the hands of all sorts of players; from bluegrass pickers to modern hardcore shredders. The following list is an all-encompassing collection of some of the most influential players in music that have been helped along the way by Epiphone.

Probably one of the best and most influential jazz players to grace the scene. His lead work along with his incredible knowledge of chord inversions inspired a whole wave of jazz players and you can hear his impact on music to this day, thus cementing his place in our Influential Epiphone Players list. Joe was often seen playing a Gibson ES-175 but was also known for playing Epiphone hollowbodies; Epiphone even gave him a signature model – the Joe Pass Emperor. If this is your kind of thing, the Epiphone Broadway might also be worth a look. 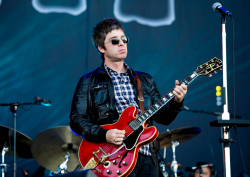 Love him or hate him, he’s had a huge impact on guitar music over the last 20 years. If it wasn’t for him, it could well be argued that the last ten years of popular guitar music would have looked very different. Noel himself is the first one to admit that he’s no Jimi Hendrix, but his abilities as a songwriter are more than adequate. He has a fantastic way of putting a melody to a chord sequence and as such, he’s earned his place in the prestigious Influential Epiphone Players list. In his time, he’s played a load of guitars, starting in the early days primarily with an Epiphone Les Paul Standard, an Epiphone Sheraton and on the acoustic side of things, an Epiphone EJ-200. If you want the look of Oasis at their Maine Road ’96 peak, the Union Jack Sheraton is a must.

The master of cool, Gary Clark Jr has been described as ‘the future of Texas blues’, and once you’ve listened to him, it’s no wonder why. He has a great voice and a great playing style that makes his sound appealing to both the traditional old-school blues rockers and the kids on the edge of discovering blues. He also helped his profile pretty massively last year by appearing on the new Foo Fighters album Sonic Highways and its accompanying TV series, as well as sharing the stage with the likes of John Mayer and the Dave Matthews Band. Even if it’s just for the fact that he’s helped bring the blues to a new generation of music fans, he has to be considered one of the most influential Epiphone players out there. Guitar-wise he’s usually seen knocking about with a Casino, something that gives him a wide variety of tones.

While Albert Hammond Jr holds down the rhythm, the other half of the guitar team in The Strokes, Nick Valensi, can be seen putting down some amazing lead guitar work. The Strokes are one of the biggest bands of the last 10 years and incorporate a lot of different elements from all sorts of genres, making them appealing to the indie crowd, the hard rock fans and even the pop lovers. From smoking the highest frets in Heart In A Cage to the subtle staccato of Machu Picchu, Valensi always manages to lay down some really interesting guitar parts. Not only this but he co-writes a lot of songs for The Strokes too. He plays a number of guitars, including a Gibson Les Paul Standard but he’s in our Influential Epiphone Players list for his repeated use of an Epiphone Casino.

Lee Malia (Bring Me The Horizon)

Perhaps not an obvious choice but Bring Me The Horizon are one of the bands at the forefront of this massive wave of metal/metalcore/call it what you will that’s increasing in popularity by the day. Lee Malia combines big, chunky metal riffs and chords with a lot of interesting soundscapey stuff that makes for a pretty unique sounding band. More and more kids are picking up the guitar as a result of this guitar-ladened metal, especially given its increasing exposure on mainstream radio stations. Lee Malia and the rest of the lads in BMTH have played a part in this, which is why we consider him to be one of the most influential Epiphone players. Epiphone have also just released a Lee Malia signature model but for something else that’s akin to his sound, look at the Les Paul Custom. 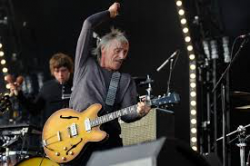 The Modfather himself, like others, has used a number of different guitars but often finds himself looking to an Epiphone Casino for his signature sound. Weller helped pen some timeless classics with The Jam, saw great success with The Style Council and had a number of big albums with his own solo career. Whilst he may not seem like your typical ‘guitar hero’, Weller really knows how structure memorable and catchy chord sequences, as well as being able to find some great sounding inversions, plus who else could essentially rewrite The Beatles’ Taxman and make it their own? Paul Weller has established himself not only as a guitarist, a songwriter and a performer but also as a national treasure, so it’s with open arms that we welcome him into our Influential Epiphone Players list.

No… you read it right the first time. If, like many of us here, you’re in your 20s and you play guitar, you’ve probably gone through a pop punk phase, and there’s no way you can go through that without deeply immersing yourself into the powerchord-ridden world of Blink 182. Blink were the leaders of their genre and inspired a whole load of kids to sling their guitar low and bash out a two-minute, A5 – D5 – E5 classic. Pop punk has been on the up in the last few years and looks set to carry on doing so though it’s questionable as to whether this would still be the case if it wasn’t for Blink 182. An Epiphone semi-hollow body helps get a big, rounded sound so check out any of the Epiphone Dots or Delonge’s signature model if this is your thing. He might not be most technically proficient player but he’s helped soundtrack an awful lot of teenage years which is why we’re considering him as one of the most influential Epiphone players.

We needed at least one bass player in here so who better than Rock and Roll Hall of Fame member, Jack Casady? His work with Jefferson Airplane and Hot Tuna helped shape the 60s and 70s rock scene that we all know and love now, plus the man played at Woodstock. His signature bass is one of the most widely played signature models of any instrument, giving players both a great sound and a great look. Even if you don’t think you know anything he’s played on, you’ve probably heard something he’s influenced so putting him on here was a no-brainer. 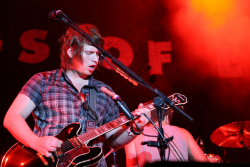 From their early, southern rock inspired days, right up to the Mechanical Bull era, Caleb’s right hand man, Matthew Followill has favoured an Epiphone Sheraton. Kings Of Leon saw some pretty notable success with their first few albums, but then things went nuclear with the release of their fourth album, Only By The Night. Whilst many of their older fans were sceptical of this altered sound, it helped cement them as one of the biggest bands in the world. Followill is perhaps an understated player, creating a lot of different kinds of sounds during his live performances. He’s just as happy blasting a big ol’ meaty riff as he is strumming along to a country tune. He’s an influential Epiphone player because of his versatility and impact that he and his bandmates have had on rock music in the last ten years. That, and the fact he helped write a song that changed the last half hour of every student night forever. 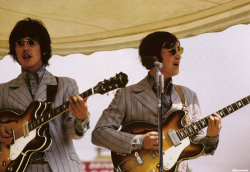 We couldn’t write up a piece on Epiphone players without mentioning what is probably the biggest and most influential band of all time. John, George and even Paul all bought Epiphone Casinos in the mid 60s and they can be heard on a number of their records around that time, a period in which their sound was undergoing a bit of a change; from jangly pop, to a slightly more rocky sound. If you want a guitar that matches the spec of Lennon’s Casino then look at the 1965 Elitist Casino; vintage tone and feel all the way! Amongst everything else the band played, the three guitarists make up the final lot of our Most Influential Epiphone Players list.