X
This site uses cookies to provide and improve your shopping experience. If you want to benefit from this improved service, please opt-in. Cookies Page.
Accept Cookies
Reidys BlogUncategorized5 Of The Best Guitars For Blues
Menu
Uncategorized

5 Of The Best Guitars For Blues

Blues music never quite goes away. It’s been around for more than 100 years and you’ll actually hear many of its elements in all kinds of different
music, from jazz and pop to heavy metal and rock. If you’ve learnt how to play the electric guitar, chances are you’ve learnt some blues scales and chord progressions in your time!

There’s much more to blues than I, IV, V chord sequences and the pentatonic scale; blues is a feeling that you can convey on whatever instrument you play. Since people started playing it in the southern states of America, the guitar has probably been the most popular instrument on which to play the blues. Whilst I do subscribe to the belief that you can play any kind of music on any guitar, there are certain electric guitars that lend themselves particularly well to playing the blues.

Here are our top five best electric guitars for blues.

Eric Clapton, Rory Gallagher, Jimi Hendrix, Jeff Beck, Stevie Ray Vaughan, Robert Cray, John Frusciante, John Mayer – they’re all blues players that have used a Strat. Since the 50s, people have been using Fender Strats for their go-to blues guitars. With three single coil pickups and five different configurations, you’ve got many different tonal possibilities, so you can go from bright and chimey on the bridge pickup to warm and thick on the neck pickup. The pickups in a Strat don’t normally have too high an output so keeping your tone clean isn’t a problem. Crank the volume on a valve amp and the sound will start to break up nicely; find that nice in between and that’s where the Strat really shines. The singles coils will work nicely with a fuzz pedal too, if you want to go for that Hendrix style 60s blues rock sound.

There are many different variations of the Strat available but if it’s straight up blues you’re playing, you’ll not go wrong with a Fender American Pro Strat – definitely one of the best guitars for blues available today. The American Special has slightly hotter pickups so if you’re leaning slightly more towards to rockier end of blues then check it out. For more info on the differences between the different American Strats then look here. If you want a cheaper alternative, the Mexican Standard Strat will do a similar job quite nicely, as will a Squier Classic Vibe Strat.

Ok, so we’re getting the big two out of the way first. Along with the Strat, the Gibson Les Paul is one of the most iconic electric guitars ever to have been made. A Les Paul is loaded with a pair of humbucker pickups which are more powerful than single coils so you will get a slighter hotter and louder output. They’re a bit fuller and beefier sounding and have a little more warmth to them. Because the body is made up of nice, thick mahogany, you get plenty of sustain – very handy for when you’re bending those high notes and want them to ring out for as long as possible. Whether you want to play on a clean or distorted sound, a Les Paul will perform fantastically throughout. One thing I do when playing blues with a Les Paul is set the amp up with gain on and turn down the volume on the guitar itself to clean it up. Then, just by carefully adjusting the volume knob on the guitar, you can get a whole load of different sounds, without touching the amp! Loads of the big blues guys do this, Joe Bonamassa especially!

The Les Paul is one of the most recognisable guitars around, and is also one of the best guitars for blues. Clapton actually played a Gibson Les Paul in his early days, as did/do Gary Moore, Joe Bonamassa, Billy Gibbons, Paul Kossof, Jimmy Page etc. Some Les Paul players who were inspired by, and grew up learning the blues then went on to make huge movements within the world of rock, such as Slash, Joe Perry and Ace Frehley. So whether it’s laid back blues, blues rock, rock that takes influence from blues – a Les Paul can do it all.

The Gibson Les Paul 2017 Standard has humbuckers that retain enough of that vintage character but with a slighty more contemporary bite – they also have coil splitting capability so you can get them to sound like single coils, just by pulling up one of the knobs. The Les Paul Traditional has a slightly lower output, and is loosely based on the much sought after ’59 models so it makes for a great guitar for the classic blues players. If you want to spend a little less, the Gibson Les Paul Faded and Studio both make for good options, as does an Epiphone Les Paul.

Another humbucker-equipped guitar, although this one instead of being completely solid, has a semi-hollow body. There is a wooden block that runs through the centre of the body but the rest is chambered. This helps the guitar resonate really nicely. When you’re doing chord work, everything rings out really nicely and lead work has a big, full bodied sound to it. The solid block in the middle help retain some of that classic Gibson sustain while the chambering gives you resonance and harmonic richness. If you dial in a lot of distortion, the guitar might start to feedback, but you’ll seldom need a ton of gain for any kind of blues music. For me, where the 335 really shines is on a clean channel, or with just slight touch of drive.

BB King plays semi hollow guitars, notably his signature Lucille guitar, which is quite similar to a 335. Other blues 335 players include Chuck Berry, Eric Clapton (again!), Eric Johnson, Larry Carlton, T-Bone Walker and Freddie King. The classic Gibson ES-335 really is one of the best guitars for blues, though a 335 Studio will also work well, and is slightly cheaper. An Epiphone Dot will give a similar sort of sound, and might be suitable to players on a budget. Also worth looking at is the Gibson ES-339 – this is very similar to a 335 but has a slightly smaller body. A fully hollow guitar like an Epiphone Casino will resonate really nicely but you do lose some of the sustain; it still makes for a great guitar for blues.

While PRS guitars might not always be the first choice for blues guitarists, they can be perfect for the genre. The finishes on all PRS’s are absolutely fantastic, and some blues blues players want something a little less ‘flash’ – if you’re ok with a stunning looking guitar, then carry on reading! The McCarty 594 is a fairly new guitar that takes inspiration from the late 50s but boasts updates for modern players too. The pickups in the guitar are 58/15 LTs – these are a 2015 take on a humbucker from 1958 so have plenty of vintage character and bite. The LT stands for ‘low turns’ and means the output won’t be quite as hot as the regular 58/15s, but will have some extra warmth and clarity – ideal for blues. Both pickups are coil tapped for single coil sounds which means it’s also really versatile. Whether you’re playing on a clean or distorted channel, the guitar sounds fantastic, very warm and full sounding, perhaps a touch thinner than the sound of a Les Paul but with lots of bite and sustain.

With the American PRS guitars, the build quality is incredible, as is the quality of every single part on the guitar. They’re easy and comfortable to play and are always set up well. If you’re on a stricter budget, check out the PRS S2 range – these are still made in America but a little more stripped down and have different specs. Further down the line but still great quality are the PRS SE guitars – blues nuts might favour the SE Custom 22 and the SE245. 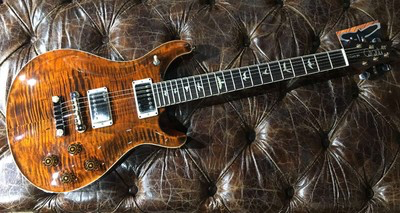 PRS guitars are incredibly versatile and so to overlook them when talking about blues is foolish. Though they haven’t been played by as many ‘blues heroes’ (they’ve only been around since 1985), they’re certainly one of the best guitars when it comes to blues.

In many respect, the SG is quite similar to the Les Paul – they both feature a mahogany body with dual humbuckers, they come out of the same factory, and they’re both great guitars for blues! There are differences however; the SG’s body is thinner – though the humbuckers give the guitar a big, full tone, it’s not quite as big as a Les Paul. The Les Paul’s maple cap on the body also adds some extra snap and bite to its tone. The SG, without a maple cap is a little darker sounding, but still great for blues, just a little different. Given that the body is quite thin, it makes for a comfortable guitar and the double cutaway on the body, where it joins the neck means that access to the highest frets is easy. Blues players love this, especially when using a slide up there.

Derek Trucks is a contemporary blues player and is doing a lot for the genre at the moment; he’s almost always seen with his trusty SG. Mick Taylor and his SG helped give that bluesy rock feel to some classic Stones albums. Whilst I’m, not putting myself up there with those guys, my go-to guitar is an SG and it’s perfect for blues, the neck and body shape make it so easy to play all over. The Gibson SG Standard is the best place to start – it will give you the classic look and sound. A cheaper, but still great alternative is the Gibson SG Faded. For someone perhaps just getting started with the blues, have a look at the Epiphone SG.

So, what is the best guitar for blues? Unfortunately, giving an answer is never as simple as that. Any one of the above five choices will make for a great guitar for someone to play blues on. The humbucker equipped guitars will give you a slightly bigger, fuller sound, the semi-hollow guitars will have a little more resonance to them and the Strat, with its single coils will be bright and slighter thinner sounding.

Whether it’s a Les Paul, Strat, a PRS, a 335, an SG or any other model you decide upon, make sure you don’t forget that blues is all about a players feel and emotion. Yes, these guitars will help give the right tone but it starts and ends with you. Listen to a wide range of music and try and take something from it all; the emotion as well as the actual music. People don’t want someone faking the blues, so play like you mean it!