X
This site uses cookies to provide and improve your shopping experience. If you want to benefit from this improved service, please opt-in. Cookies Page.
Accept Cookies
Reidys BlogUncategorized5 Of The Best Guitars For Metal
Menu
Uncategorized

5 Of The Best Guitars For Metal

This is one for the metal heads; some advice on the best guitars to get if you feel more at home with the likes of Metallica or Mastodon than McFly or Mumford & Sons. I won’t confess to be an expert on every sub-genre of metal that has developed over the last 40 years but since Zeppelin and Sabbath, there have been players that have wanted to push the boundaries of guitar playing, to achieve an ever more aggressive sound. Some have done this by using more distortion on their amps, using higher output pickups, developing a faster technique and through the use of a LOT of flat fifths. Also with metal, you need the right attitude and the right look; you can’t stroll on stage at Download with a pink Strat. With that in mind, here is our list of five of the best guitars for metal.

Jackson are synonymous with metal. There’s a massive range of players, past and present that have used them – Randy Rhoads, Scott Ian, Corey Beaulieu of Trivium, Dave Mustaine, Misha Mansoor, Matt Tuck, Kirk Hammett and many more.

There are quite a few different versions of the Jackson V, catering for players that are at different levels. The body shape oozes heavy metal and they’re all fitted with high output humbuckers giving you searing lead tones and chunky rhythm sounds. Most Jackson neck profiles tend to be fairly thin, lending them nicely to a faster playing style. Particular highlights in the range include the Corey Beaulieu signature and any of the Rhoads models. If a V isn’t your thing (begs the question why), check out the Jackson Dinky range – still great guitars for metal but slightly more subtle in aesthetics.

Ibanez are world renowned for their suitability for heavy metal (and jazz too, but that’s a different kettle of fish). All sorts of metal guitarists have been using Ibanez throughout all stages of their career; from starting out through to headlining shows. To be honest, you could probably fill a list of best guitars for metal with Ibanez instruments as many of them feature deep cutaways that allow easy access to the highest frets for the shredders, high output pickups, thin neck profiles, and dive-bombable bridge systems.

I’ve highlighted the RG series as it represents the ‘Super Strat’ category nicely and offers something to players, regardless of their budget. To the budding metal guitarist starting out, the GRG170DX is a nice way to begin a career in shred and chug as it offers a wide range of tones with two humbuckers and a single coil pickup, great for rhythm and lead work alike.

Further up in the Ibanez Premium Range is the Ibanez RG970WQMZ and is one of the best guitars for metal around that price. It’s fitted with high output DiMarzio humbuckers that blend both brightness and warmth to create a smooth, controllable tone that will simply scream when you need it to. It’s also got jumbo frets with Premium Edge Treatment for smooth and fast playability, a strong and stable neck and an amazing finish.

Another incredible instrument for metal guitarists is the Ibanez RGD Iron Label 7-string. Get rid of the need for drop tuning – this guitar comes shipped with a factory tuning of low A to D. This model has got a pair of DiMarzio Fusion Edge pickups that have been specially designed for the 7 string guitar to give you an aggressive and progessive metal sound. It’s also got a longer 26.5″ scale, jumbo frets, deep cutaways and… that finish!

Yeah, you read it right first time. The Telecaster has been one of the best emerging guitars in the metal world for a good few years now. John 5 (ex-Marilyn Manson) uses a Tele and Slipknot axeman Jim Root uses a range of Fenders for his sound, including a Tele fitted with high output humbuckers; check out the Squier version here. A Tele can give you definition and clarity that other, more typical metal guitars don’t. If you’re playing in a metal band with two guitarists, it’s definitely worth one of you trying out a Telecaster (not both though, you don’t want the Status Quo look). They’re nice and bright and so will complement a guitar that’s the opposite in terms of sound. Play a chord on a Tele and all the notes will ring out nicely which is ideal if you’re playing chord extensions. Hold down the rhythm with those 9, 11, and 13 chords and you’ll hear the notes clearly whilst your other guitarist widdles over the top of you. A Tele isn’t just good for metal rhythm players but lead guitarists too. The neck pickup is smooth and warm and will really shine as it’s got a unique sonic tonality. If you want to cut out a bit of the brightness, simply roll back on the tone knob and use a compressor pedal to thicken up the single coil pickups.

Last year, Fender announced the American Elite series featuring their new noiseless pickups so these are great for use with high gain rigs. Of a similarly high standard is the Fender American Pro Telecaster. These have new pickups, carefully balanced and calibrated so you get a great response from them – this allows you to play with a lot of dynamics. They’re also built like tanks so can withstand the heaviest of metal beatings, and they’re comfortable to play. If you want to spend a little less, check out the Mexican Standard Teles and the Squiers too. The Telecaster is really one of the best guitars for metal; I was doing some work with a hard rock/metal band last year and, out of a few guitars I found the Tele, strung with 11s was the best guitar for the job – who’d have thought it eh??

The Les Paul makes it into a lot of these lists because it is so versatile. The Les Paul Standard is an ideal guitar for metal because it gives you a tone that fills a huge sonic space. The thick mahogany body can sustain notes for days while the maple cap lends a touch of snap and articulation that helps metal guitarists’ solos remain clear and defined. The 2017 Gibson Les Paul Standard is fitted with Burstbucker Pro pickups which feature an Alnico V magnet that helps produce a fatter, meatier tone with more drive. It takes the vintage sound you’d associate with an old Les Paul and spices it up with a bit more of an edge. For clean breaks, you dial back on the volume knob, switch channels on your amp, or use the coil split ability to get tones more akin to a single coil equipped guitar.

The Les Paul looks right for pretty much any guitar player, including metalheads. Some of the best metal guitarists have used a Les Paul; Randy Rhoads, Zakk Wylde, Slash, Alex Lifeson, Buckethead, Matt Heafy, Lee Malia, Bill Kelliher, Adam Jones and more. For metal, you’ll not go wrong with a 2017 Standard. Like with the Flying V, you’ve got the option to go for High Performance, with hotter pickups. If you want to push the boat out, look at the Gibson Les Paul Custom. There is also a wide range of Epiphone Les Pauls that are less expensive (the Les Paul Prophecy is an great guitar for metal around the £500 mark).

Another guitar that finds its way into the hands of a variety of players, the PRS Custom 24 is perfectly suited to metal guitarists, just as it is to the classic rock and blues guys too. PRS are very much about innovation so modern players who want to push boundaries can do so. The American Core Line Custom 24 guitars feature the new 85/15 pickups which allow for clear and classic metal tones, as well as everything else up to that. They’re based on pickups from 1985 but PRS have taken everything they’ve learnt over the last 30 years and applied it to these pickups, resulting in a modern classic. Even through a super high gain rig, you’ll still retain clarity and definition. 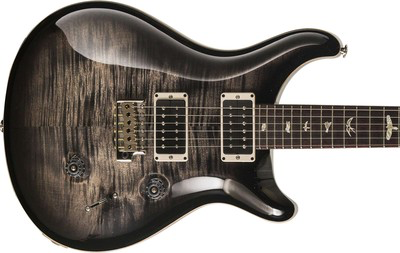 PRS guitars offer seamless playability so if you’re playing some of the most technical metal out there, a Custom 24 is an ideal instrument to carry it out on. They constantly perform and are incredibly comfortable to play; I sometimes feel like a nice PRS pretty much plays itself. The double cutaway looks cool and allows easy access to all 24 frets, plus the five way pickup selector allows for single coil style sounds as well as beefy humbucker tones. For those that don’t want to spend this much, the PRS S2 Custom 24 gives you a no-frills American built guitar that will work just fine for hard rock and heavy metal. Likewise, the cheaper SE range offers amazing value for money; check out the SE Custom 24, SE Tremonti models and the Seymour Duncan equipped Mark Holcomb signature model.