A Guide To 2019 Gibson Les Pauls: Standard VS Studio

Every year, Gibson update their range of USA guitars, sometimes changing models around, adding new ones in, swapping out pickups etc. Two staple models that we see every year are the flagship Les Paul Standard and the Les Paul Studio.

With all the change in spec and what not, you might wonder what the differences are between these two guitars – that’s why we’ve put together this handy guide. The differences in spec are highlighted in the table below; for a more in-depth comparison, carry on reading.

Just by looking at the table, you can see that there are quite a few differences between two seemingly very similar guitars. The Standard is fitted with Burstbucker Pro pickups, the Studio is fitted with an Alnico 498 in the bridge and a 490 in the neck. In terms of how they sound – I find the Standard to be a little bit brighter, and somehow harmonically richer (though that could well be due to differences in wood and build). The Studio is a little bit mellower, with a slight peak in the upper mids (great for cutting through a band mix). Both give you an undeniably ‘Les Paul’ tone though. The pickups in the Studio are rated by Gibson as having a slightly higher output, though the difference is pretty slight – both guitars make for excellent choices for any rock player.

In terms of versatility, this is where the 2019 Standard really excels. As well as having a coil tap function, whereby you lift the volume knobs to get single coil-like tones (the Les Paul Studio has this as well), the Standard has an internal 5-way DIP switch. This gives you a massive selection of different tones. You can choose between coil-tap and coil-split (a bit like the difference between a true single-coil pickup and a P90), you can engage the treble bleed circuit, and even switch on what is essentially an on-board compressor (the Transient Supression circuit) – a handy tool if you’re recording. All this really helps make the 2019 Les Paul Standard an incredibly versatile instrument, useful in pretty much any scenario a guitarist might find themselves in. Remember though, if you don’t want to mess around with any coil tap/splits or anything like that – you don’t have to! These guitars are as simple or as complex as you want them to be (though if a straight-up, old school Les Paul is what you’re after, check out the 2019 Les Paul Traditional). 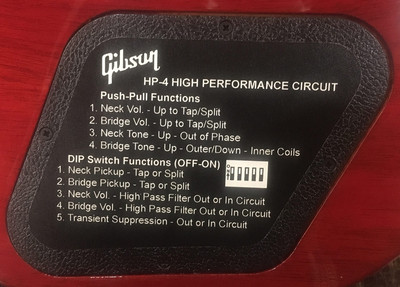 What’s The Difference? – Feel and Features

Sitting down with these two guitars, there’s definitely a difference in feel. The necks aren’t too dissimilar – they’re slim, though the Standard’s is a little thinner on the treble side. The 2019 Standard has also got a compound fretboard radius, meaning it’s slightly more curved towards the nut end and gradually gets flatter – some players prefer this as they find it makes chords fret more easily at the bottom, and lead work easier at the top. For me, the difference was more in the body. Both are weight relieved, but with the binding, and slightly thicker body design, the Standard is a bit heavier – great for some people (myself included), but others might find the Studio more comfortable.

The Les Paul Studio was put into production in the early 80s to offer players that Les Paul sound, without any flash appointments. It’s still that today, though with the addition of coil-tap pickups, it’s an even more versatile instrument than it was then. The Les Paul Standard is Gibson USA’s flagship model and tends to reflect the needs of players of the time. The Standard is a little bit brighter, and the Studio a little mellower, but with nice bite to it, though both guitars deliver the unmistakable Les Paul tone that classic bands and artists made you fall in love with years ago. The Les Paul Standard is more expensive, and it does feel and look more premium – it’s got a nicer maple top, a slightly thicker body, binding, plus the addition of the internal DIP switch makes it the ideal tool for literally any musical situation you could find yourself in. The 2019 Les Paul Studio and Standard are available in a range of different finishes too, so that might sway it for you – whichever one you opt for though, is sure to keep you happy for a long time.