Casio and Bechstein – two of the most well known names in music, have collaborated to create a product that looks set to revolutionise the world of digital pianos. The Casio Grand Hybrid Celviano series, made in very close collaboration with Bechstein comprises of three models; the GP300, the new GP400, and the flagship GP500. Casio have been at the forefront of music technology for the last 35 years and even developed the first ever electronic keyboard. Bechstein on the other hand, have a rich history, steeped in tradition spanning more than 150 years. The marriage of these two companies has resulted in a digital piano that embraces the classic traditions, sophistication, and sounds of days gone by whilst taking advantage of all the modern practicalities of a digital instrument. The Casio Grand Hybrid boasts many features seen on a Bechstein grand piano, to make this a truly unique and even futuristic digital piano that will please both contemporary and traditional players alike. 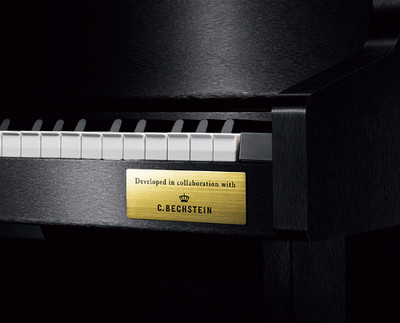 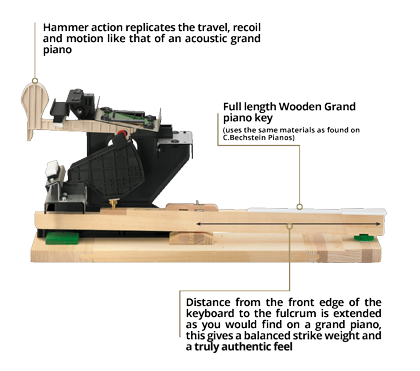 Of paramount importance to any pianist is the feel of the instrument. Here lies another close collaboration between Casio and Bechstein. The keyboard action on the Grand Hybrid features real hammers that follow the same motion path as that of an acoustic piano. This brand new mechanism allows true, authentic acoustic feel whilst giving the player the ability to produce notes faster than on an acoustic piano – exemplifying Casio and Bechstein’s marriage of technology and tradition. Also featured on the Grand Hybrid pianos are wooden keys that receive the same drying and treatment as those of an acoustic piano. The finishing process is the same as that for Bechstein’s acoustic grand pianos, resulting in an incredibly authentic feel. For an instrument whereby all the feel and emotion is transferred via the keys, the feel is incredibly important. Using a real hammer action and full length, wooden keys lends this new digital piano series a feel that’s incredibly close to that of an acoustic instrument. It responds to all the subtle players nuances – close your eyes and you’ll think you’re sitting at a concert grand!

For most players, the sound of an instrument is the most important factor. Casio have worked very closely with Bechstein to develop their new piano sounds for the Grand Hybrid. All three models boast three new piano tones which were created by analysing and studying the world renowned Bechstein D282 concert grand and by working with the Master Piano Maker at Bechstein. These three sounds, named Berlin Grand, Hamburg Grand and Vienna Grand all have slightly different tonal characteristics that lend themselves nicely to different playing styles. Listen to the soundclips below to to hear all three piano sounds; it’s like owning three of the best concert grand pianos in the world! These sounds, and indeed all the sounds on the Casio Bechstein Grand Hybrid are then faithfully recreated through a six way speaker system that projects the right kinds of frequencies from the right area of the instrument, as would occur on an acoustic piano.

The first noticeable difference between the GP300 and GP500 is the finish. The former sports a satin black finish whereas the latter has a luxurious polished ebony finish. In terms of features, the GP500 has nine more tones giving you a little more scope for creating different sounds and ultimately, offering a touch more versatility. The GP500 also reproduces more of the mechanical noises, reverberations and resonances that you would hear with an acoustic grand. This gives the higher model a deeper sense of realism. Another unique feature you get with the GP500 is what Casio call Scenes. A Scene is the combination of an instrument, venue type and effects. So, you could choose the Berlin Grand piano, in an opera hall, with a touch of chorus or alternatively, you can choose from a selection of genres or famous composers and get a sound that suits their style of music. So, if you’re playing pieces by Satie, Debussy, Chopin etc, you can select the right Scene to get them sounding perfect. When you’re creating your own, you can save up to 10 of them for quick recall.

Announced in April 2016 at Frankfurt Musikmesse, the GP400 adds a new style to the range which has all the features of the flagship GP500, but with a new, taller, matte black cabinet design. It looks great and brings even more realism to the plate by increasing the distance from the keys to the music stand, putting your body position in a different space. This positioning now closely matches that of a grand piano so, as small a change as it may sound, it really does add to the experience of feeling like you’re sat behind a real Bechstein grand. 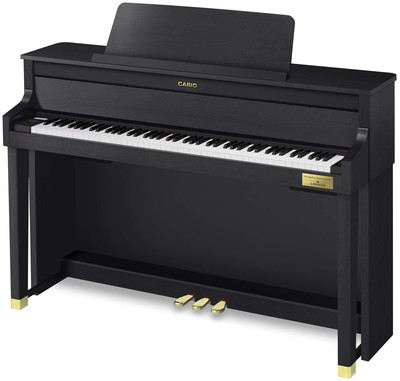 The new Casio Bechstein Grand Hybrid piano series blend the worlds of technology and tradition beautifully. With Bechstein’s rich heritage brings a wealth of experience in creating some of the world’s finest acoustic pianos; and when you tie that with one of the biggest technology brands in the world, the result speaks for itself. Yes, the GP300, GP400 and the GP500 all faithfully replicate the feel and sound of an acoustic grand, but what you can’t put in to words is the experience that sitting behind these pianos gives you. It really does take it to another level. All three piano tones sound wonderful and give the player the unique ability to cover a variety of iconic piano tones, but for me, the real crowning glory comes with the stunning hammer action and wooden keys – it feels very authentic. The GP400 and GP500 boast a few more features compared to the GP300 and offer a playing experience more akin to that of an acoustic grand piano, as well as the GP500 sporting that elegant polished ebony finish; but they both share that piano action. You know, some things just work well together; cheese and wine, ebony and ivory, and apparently, Casio and Bechstein.