X
This site uses cookies to provide and improve your shopping experience. If you want to benefit from this improved service, please opt-in. Cookies Page.
Accept Cookies
Reidys BlogUncategorizedEpiphone VS Gibson: Which Is Better And What Are The Differences?
Menu
Uncategorized

Epiphone VS Gibson: Which Is Better And What Are The Differences?

The Gibson Les Paul is one of the most iconic guitars of all time. It’s the guitar that millions of aspiring players have always dreamt of owning one day. Not far behind it in terms of popularity are guitars such as the SG, ES-335, Flying V, Firebird amongst many other legends. These guitars, usually armed with a pair of humbuckers, have been rife within rock, blues and metal over the last years.

Gibson guitars are incredible, however they can be quite expensive. Luckily, Epiphone make more budget versions of these guitars. In 1957, the company that owned Gibson bought out Epiphone and since then, they’ve been sister companies. Other brands may make copies of the Les Paul, SG, 335 etc but Gibson and Epiphone are the only two brands that can really lay claim to these guitars. Alongside producing cheaper versions of Gibson models, Epiphone also make some guitars that are unique to them and are legends in their own right.

So, we know that Epiphone are generally cheaper than Gibson, but what other differences are there between the two brands? This time, we’ll be concentrating on electric guitars, though both brands do make a range of acoustics too.

Epiphone VS Gibson – What Are The Differences?

First off, Gibsons are made in America, whereas Epiphones are mostly made in China. In 2002, Epiphone moved into a factory in China that exclusively produces their guitars and no one else’s. They’ve also enlisted the help of ex-Gibson luthiers to help get the Epis as close to the Gibbys as possible, whilst keeping the price down. Whilst the building processes in Asia and America are alike in more ways than they’re not, there are still differences – largely, that the American factories have more highly-skilled workers. It’s also worth noting that American-made guitars tend to hold their value better, if you come to selling it on later.

Another big difference between Gibson and Epiphone is the actual parts and material used. The wood used to make Gibsons, particularly in premium models, is of a higher grade. For example if you look at a Gibson Les Paul Standard and an Epiphone Les Paul Standard, the tops will often look a lot different. That’s because better quality maple is used on the Gibson and produces a better ‘flame’ visual effect; something that’s sought after among fans of a fancy top. Not only does better wood look nicer, but it increases resonance too – you’ll notice this unplugged as well. Sit with a Gibson and chances are, it will ring out more when you play it than an Epiphone. 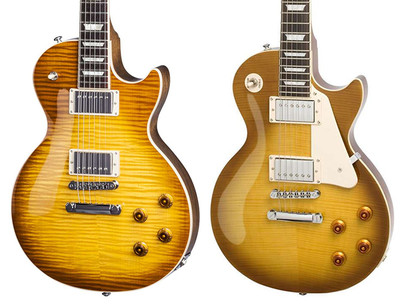 Epiphone Les Paul Tribute fitted with Gibson pickups – as good as a Gibby?

The hardware on a Gibson is better than Epiphone also – small things like switches, knobs and tuning pegs can wear out and break over time. Parts such as the bridge and nut have direct contact with the strings and subtly affect the sound, particularly how the guitar sustains – a big thing with Les Pauls. They say a guitar is the sum of all its parts and most things that make up a Gibson are of a higher quality than they are on an Epiphone.

As I mentioned earlier, higher grade wood looks better and you’ll find that Gibson’s come in a wide variety of fancy finishes and colours. The headstock shape is also different – while this might not be a sticking point, if you’ve idolised Gibson players all your life, you’ll notice the difference! The body is also a touch thicker on a Gibson Les Paul than it is on the Epiphone counterpart. 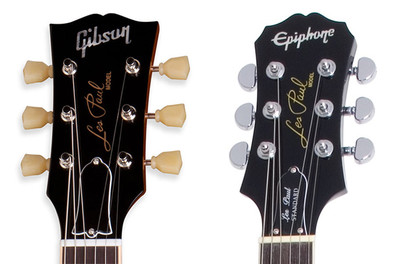 Typical headstocks on a Gibson and Epiphone guitar – note the slightly different shape
Does This Mean That Gibson Are Better Than Epiphone?

Well, yes, 99% of the time, they are – but this is of course subjective to your personal preference. Some of the high end Epiphones are very close to the lower end Gibsons – then it becomes fairly subjective; which one do you personally prefer? A Gibson Les Paul Faded isn’t too much more than an Epiphone Les Paul Custom Black Beauty – I’d probably be swayed by the Gibby but if you’re after something either with three pickups, or the look of a LP Custom then you’d go for the Epi. Generally the Gibson build quality is better so they’re more likely to last longer, especially if you’re taking it on the road. The use of better grade wood also means the Gibsons will get better as they age and tend to resonate and sustain more.

A Gibson Les Paul Standard is usually around the £2,000 mark – the Epiphone version is normally well under £500. Is the Gibson £1,500 better? That’s subjective really. For some players, only a Gibson will do.

If you’re just starting out, and you want a decent guitar to get the feel of it without breaking the bank, get an Epiphone. In my opinion, the Les Paul Special VE is the best twin humbucker guitar you’ll get for that kind of money. If you’ve got a bit of cash saved away and want an great guitar to start with, then check out the Gibsons – if you decide that the guitar isn’t for you, you’re probably going to be able to sell it on later for a good price. Also, it’s worth noting that buying a high quality guitar will be easier to play and keep in tune, giving you the best possible start and will help keep you enthused.

It’s important to stress that Epiphone guitars aren’t just for beginners – they’ve been good enough for likes of Noel Gallagher, Paul Weller, Frank Iero, Nick Valensi and many more. Some players who favour Gibson as their main instrument often have the Epiphone counterpart as a reliable backup at gigs.

I really like Epiphone guitars – I have a few at home and I do use them. However, I’ve also got a Gibson, because the time came to upgrade. And that’s what it will be for many players – starting out with an Epiphone, idolising those legendary Gibson players and then saving up to buy your first Gibson. Epiphones start at just over £100 so it’s not too much money to spend to test the waters with your first guitar. They improve in quality, playability and sound as you progress up through the range – around the £500 mark there is some crossover with Gibson but much past that, the Gibsons really are in a different league. There’s a reason why so many professional players choose Gibson and no doubt, will continue to do so for many years.