X
This site uses cookies to provide and improve your shopping experience. If you want to benefit from this improved service, please opt-in. Cookies Page.
Accept Cookies
Reidys BlogBuyer's GuideFender VS Gibson: What Are The Differences Between Them?
Menu
Buyer's Guide

Fender VS Gibson: What Are The Differences Between Them?

There are many different brands of electric guitar out there on the market and here at Reidys, we try to focus on a variety to give you as much choice as possible. Two of these brands – Fender and Gibson, are absolute gargantuans of the industry and have been around for decades. You’ll more than likely have seen some of your guitar heroes wielding one of the two, or perhaps both. The two most well known electric guitars of all time come from both camps…

Something we get asked quite often is “Are Gibson better than Fender?” or “Are Fender better than Gibson?” As you might expect, there’s no real answer to this conundrum; both are fantastic guitar brands that produce some of the best instruments in the world. However, both do have characteristic features that can render a certain guitar more suitable to a certain genre or style of music. What we aim to do here is explain some of the major differences between Fender and Gibson – bodies, pickups, scale length and fingerboard radius. This will hopefully help you choose which one is right for you. It’s a bit like comparing apples and pears so we will have to make some sweeping generalisations, but here goes…

What are the differences between Fender and Gibson guitars?

Probably the most easily recognisable difference between Fender and Gibson is the variation in body shapes. A Strat and a Tele both look drastically different to a Les Paul or a big-bodied ES-335 or the double cut SG. Not only do body shapes affect the aesthetic but they also affect tone. A Les Paul is thicker than a Fender Strat so there is more of a mass to resonate. 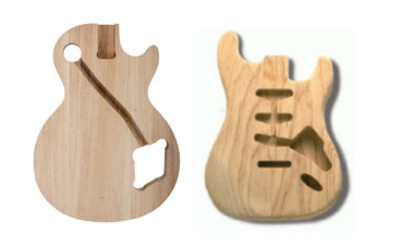 Arguably, more important than body shape is the wood that the body is made out of and here lies another difference between Fender and Gibson. Typically, Gibson use more mahogany than Fender. A Les Paul features a mahogany body with a maple top and the body of an SG is usually all mahogany – the same can usually be said for the Firebird and Flying V. A mahogany body gives a slightly darker sound; a little richer, warmer and usually with more sustain.

Many Fenders on the other hand, use alder or ash which gives a balanced and brighter tone, often with quite pronounced upper-mid range frequencies. Usually, alder and ash are also lighter than mahogany so if the weight of your guitar is an issue, then this particular difference between Fender and Gibson could help you make the all important decision.

Normally, Fenders sport single coil pickups whereas Gibsons will be fitted with humbuckers. This has been one of the main differences between Fender and Gibson for the last 70 years or so. Single coils have been around for longer and tend to have a brighter, thinner sound. Some say that single coils in a Fender Strat have a ‘quacky’, ‘chimey’ or ‘spanky’ sound and a Fender Telecaster sounds ‘twangy’. Single coil pickups can sometimes pick up interference from radio signals, electronic current etc which is why Seth Lover, for Gibson, put two single coils together and made the humbucker, so called because it bucks the hum, or interference. Humbuckers have a higher output and so are a little bit louder. Usually, they are warmer, fuller and beefier sounding. Here are some videos which will give you an idea of how the different pickups sound.

Now, it has been said before that single coil pickups are good for clean sounds and humbuckers are good for overdriven sounds because the humbuckers give out more signal and therefore distort better. Whilst there might be a small element of truth in this, it’s all down to personal preference; a Strat or a Tele can sound just as good as an SG or Les Paul when on a distorted channel and vice versa.

To generalise, guitars equipped with single coil pickups i.e. Fenders, are often used for funk, blues, pop, country, soul and light rock. Gibsons, with their humbuckers are used more for rock, blues rock, classic rock, metal, jazz (especially hollow body Gibsons) and punk. There are of course many exceptions where people have used a Strat for metal and a Les Paul for pop; it’s just to give you an idea. The pickups are a huge part of a guitar’s sound which is why they are one of the main differences between Fender and Gibson.

The scale length is the distance between your top nut and the bridge saddles. This effects the tension of your strings and the actual sound you get from your guitar and yep, you guessed it, there’s a difference between the scale length on a Fender and on a Gibson. Generally speaking, Gibson use a 24.75” scale and Fender use a 25.5” scale. On a Gibson style scale, the harmonics you get from lightly touching the string with your left hand are closer together and the tone is slightly warmer and thicker. The harmonics on a Fender scale are more spaced out which helps contribute to the guitars ‘chimey’ and bell-like tone.

This is a number that determines how much of a curve the fingerboard on a guitar has and helps make a Fender feel different to a Gibson. A lot of Fenders will have either a 7.25” or 9.5” radius and most Gibsons will have a 12” radius. So what does this mean to a player? A shorter radius means the neck has more of a curve and a longer radius means the neck will be flatter.

Some lead players prefer a thin neck with a long radius, so a Gibson Les Paul Standard might be an ideal choice. However, as we’ve learned there aren’t really any set rules, so that doesn’t mean lead guitarists will only play Gibsons, it’s just that their flatter fingerboard profile makes it more comfortable for some players. Some Fenders even have a compound fretboard radius – that is they go from 9.5″ at the bottom to 12″ towards the top – the best of both worlds! The new Fender American Elites boast this. The best way to see which one you prefer is by trying both out. The neck radius is a huge part of what makes a Fender feel different to a Gibson, and vice versa. 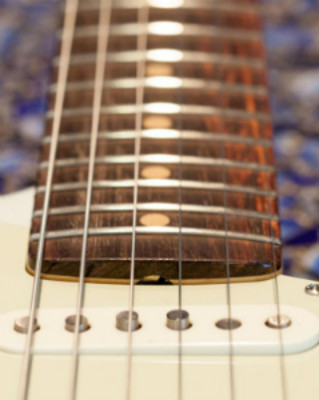 There are some big differences between Fender and Gibson guitars that affect how you play it and the resulting sound. The varying pickups in these guitars, the range of woods used and the scale length all change how a guitar will sound and the fingerboard radius has a big effect on how it will feel. If you’re after a big, full, rich, warm sounding guitar then a Gibson might be well suited to you. If it’s a thinner, brighter, twangier or chimer tone you want, then check out a Fender.

Fenders have been very prominent within blues, country, pop, light rock, funk and soul, and Gibson are often associated with classic and hard rock, blues rock, and some metal. That said, there have been metal and rock players using Fenders (Jim Root, Yngwie Malmsteen, Ritchie Blackmoor) and pop and funk players using Gibson (Al McKay, Jimmy Nolan, Freddie Stone). Guitars, whether it’s Gibson or Fender, or any other brand, are tools for you to make music with and as such there are no strict rules to adhere by. If it feels right and it sounds good, you’re on to a winner!