Recently, Gibson revamped the entire USA range, doing away with the yearly series, and sticking with a diverse lineup made up of core models, that players genuinely want. The new guitars can be split up into two categories – Original and Modern. Sitting atop of the Original series are the two Les Paul Standards – the 50s version and the 60s – there’s also a 50s P90 model, but that’s fairly self-explanatory. This article will explore the differences between the new humbucker-equipped Gibson Les Paul Standard 50s and the 60s.

For me, the two biggest differences between the Les Paul Standard 50s and 60s are the neck profile, and pickups. They’re pretty important points too: one affects how the guitar sounds (you could claim that they both do, but this is neither the time nor place for that debate), and the other affects how your left hand navigates the fretboard.

The biggest factor in a guitar’s tone (apart from the player) is the pickups. Whilst both the 50s and 60s Les Paul Standard have Burstbuckers of some kind, there are tonal differences that set them apart. The 50s Standard has Burstbucker 1 and 2 pickups, which use Alnico II magnets. The 60s has Burstbucker 61 R and T which utilise Alnico V magnets, and have a hotter output. I played both guitars through a valve amp just before the edge of breakup – the 50s Les Paul remained clean, however the 60s, when I dug in with my right hand, forced the amp to break up. The 60s is also a little brighter, with more of a pronounced attack; the 50s on the other hand has a mellower and warmer tone.

Both guitars sound great both clean and overdriven. They’re both vintage style pickup sets, and they both have that unmistakable Gibson PAF-style bite. The 61 Burstbuckers just push the amp a little bit more, and have a stronger top-end end. I wouldn’t say that one set is better than the other; it’s more that different playing styles might suit different pickups.

The Les Paul Standard 50s has a thicker neck profile than the 60s. Most people have a preference of what kind of neck they prefer – if you don’t, I’d suggest coming down and trying them both out. Maybe if you’re used to modern Fenders, then the Slim Taper profile on the 60s might feel a little more familiar. Some players claim that it’s easier to play faster on a skinnier neck – I’d say that it’s more down to personal preference and what you’re used to (give me a chunky neck profile any day). 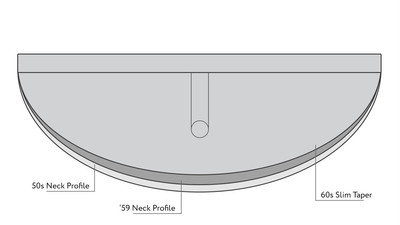 The two guitars have different tuners too – not a huge difference, but one worth mentioning. The 50s Standard has Gibson Vintage Deluxe tuners; the 60s has Grover Rotomatics. Some players used to swap out the Kluson tuners (similar to the Vintage Deluxe) on their late 50s Les Pauls and swap them for Grovers (Ace Frehley and Jimmy Page to name a couple). Both sets work well and hold their tuning, but both add a certain aesthetic to the guitar – again, it’s down to personal preference which one you like the look of more.

There’s also the issue of how the tuners affect the sound of the guitar. The Grovers weigh more, so you’ve got more mass on the headstock, as well as attached to the end of the string. Now, whether more or less mass on the headstock is a good thing is up to you – some players claim that having less (like the Vintage Deluxes on the 50s) allows the headstock to vibrate more, and gives you more resonance. Others claim that having more mass gives you more sustain and rolls off some of the harsher top end frequencies. My opinion (thanks for asking) is that how you play the guitar is going to make much more of a difference to how it sounds than any tuners ever will. It’s all so subjective, but for me, the tonal difference that a set of tuners makes is negligible. If it makes a difference to you, then great – having the different sets on the 50s and 60s Les Paul Standards might help sway your decision.

If you look at the spec, you’ll find that the 50s Les Paul Standard simply has a maple top, whereas the 60s has AA flamed maple. Like with some 58 Les Pauls that were supposedly, ‘plain-top’, some of the 50s Les Paul Standards I’ve seen so far have actually had a bit of a flame to them – not quite as obvious as on the 60s, but not what I’d call completely plain. Turnover of these guitars is pretty quick at the moment, here at Reidys – if you’d like to see pictures of the actual guitars we have in stock at any moment, please just get in touch with us and we’ll send them over.

How Do These Guitars Differ From The Previous Generation Les Pauls?

These new 50s and 60s Les Paul Standards are very different to the 2019 range of Les Paul Standards. The 2019 Standard had much higher output pickups, as well as coil-tap function and an internal DIP switch to give you access to loads of different tones. These new guitars do not have any of that – they are back to basics Les Pauls, with vintage-style pickups. You do however have two different ‘flavours’ of vintage, as well as the choice of fat neck, or skinny neck.

On paper, these new Standards are very close to the 2019 Traditional, however, having played both, I can say that they are different. I can’t quite put my finger on what it is, but the new guitars have something really special about them (don’t get me wrong, the ’19 Traditionals were ace). Apparently, Gibson have improved the area of the factory that deals with QC so perhaps that’s what feels different. Maybe there’s just more love going into these guitars? Everyone in the whole industry seems completely behind Gibson’s new management, and I reckon that might be transpiring onto the factory floor. Gibson are reverting back to their Golden Era, and it seems that the people making them are really enjoying that – they’re making guitars that are better than ever!