The Gibson Les Paul Standard and Les Paul Custom are probably the two most popular models within the Les Paul range. The Custom is a little older, making its debut in 1954 when the man himself, Les Paul wanted a deluxe version of the regular guitar – the idea behind it was to create a guitar that was still very much a Les Paul, but one ‘dressed up in a tuxedo’. The Standard then came along in 1958 and the rest is history. So, is the difference between the Les Paul Standard and Les Paul Custom just aesthetic? Whilst a large part of it is, there are also differences in terms of sound and playability. Since the 50s, changes have been made to both guitars (more so to the Standard). The following table will hopefully highlight the main differences in spec.

What’s the difference between the Gibson Les Paul Standard and the Les Paul Custom?

First off, the Gibson Les Paul Standard and Les Paul Custom have different pickups. As you would expect, this means that they do sound different. Whilst they both retain some of the 50s style PAF characteristics, the Custom, particularly in the neck position, comes closer to it, thanks to slightly lower output 490R pickup loaded with Alnico II magnet. Having this in the neck position and the higher output 498T pickup (loaded with Alnico V magnet) at the bridge means that you’ve got a pretty versatile setup. The pickups have a a slight emphasis within the upper mid frequencies meaning that you can cut through a mix easily when you need to.

Compared to the Les Paul Standard, I find the Custom to be slightly darker in sound, a little mellower and not quite as bright. Gibson rate the 490R’s output at 7.4 and the 498T at 9. The Standard’s Burstbucker Pro pickups are rated at 7.4 (neck) and 8.3 (bridge) and both feature Alnico V magnets, so the Custom has a slighter hotter output. The pickups in the Les Paul Custom are also wax potted to help keep microphonic feedback at bay when you’re cranking things up. In theory this makes it a little more suitable for hard rock and metal but in reality, you’ll do fine with either guitar if that’s your bag.

When I played the Les Paul Custom acoustically, I found that it resonated better than the Standard; perhaps this is due to the slightly thicker body design, or the difference in weight relief methods, or the fact that the body is made from one solid piece of wood, rather than two. 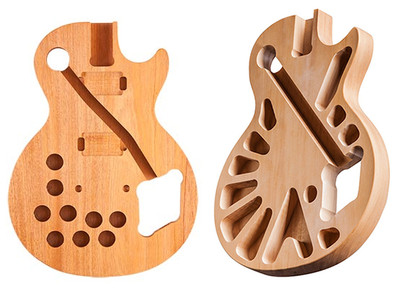 Whilst the Gibson Les Paul Custom has evolved a little over the years, it’s still very much the guitar it was circa 1957. The Standard however has changed more, adapting to players ever changing needs. One of these changes is split coil pickups that allow you to get single coil sounds at the pull of one of the volume knobs. You’ve also got the option of phase changing in the middle position for that famous, ‘quacky’, Peter Green sound. In terms of playability, the Standard is more of a modern guitar; the Asymmetrical Slim Taper neck profile is thinner than that of the Custom and locking tuners help keep your guitar in tune. The Standard is also, on average, lighter than the Custom – though people often have their preferences when it comes the weight of a guitar.

What the Les Paul Custom definitely has over the Standard is an extra touch of class. The 7 ply body binding on the front and back really sets the whole guitar off, regardless of which finish you opt for. The multi-bound headstock with diamond inlay also looks amazing – there’s something about that headstock that impresses me every time I see it.

The Les Paul Custom is made in a different factory to the Standard too. As you might assume, the Custom is made at the Gibson Custom Shop factory over in Nashville where guitars are made more by human hands than machines. Part of the price difference between the Custom and Standard is due to these highly skilled experts who make your Custom Shop Gibson. The Richlite fingerboard on the Custom has the feel of ebony but is more consistent, won’t contract or expand and is more sustainable. In theory, the rosewood fingerboard on the Standard will add some warmth to the sound, and the Richlite will add some brightness, which when combined with the different pickup configurations will provide a rich, complex balance in tone on both instruments.

So, is there a difference between the Gibson Les Paul Standard and Les Paul Custom? Yes, there are quite a few. Aside from all the aesthetic additions that help make the Les Paul Custom look so sophisticated, differences in the design do affect how the guitars resonate. The pickups prove to be one of the biggest differences between these two guitars. The Burstbucker Pros in the Standard have a little more brightness, even sparkle to them and Custom is a touch darker whilst still having plenty of bite in the upper mids. Both have that classic, full, beefy sound you associate with a Les Paul, though when using the neck pickup of the Custom, you do have more of that late 50s PAF sound.

Both guitars are versatile; the Standard allows you to split coils so you can go from humbucker to single coil sounds, and the Custom has both Alnico II and Alnico V magnets to give each pickup a more distinct flavour. The Custom has a slightly thicker body design and a slightly thicker neck profile – like they did in the late 50s, plus it receives a little more attention to detail at the Custom Shop factory.

The Gibson Les Paul Standard has both feet placed firmly in the 21st century whilst giving a proud salute to the past 60 years that helped shape it. The Gibson Les Paul Custom has one foot in today’s world and one in the late 50s; Gibson call its pickups ‘modern classics’ and that’s a perfect way to describe the guitar. The Les Paul Standard is an amazing guitar; it’s versatile, sounds incredible and plays great, but for me personally, the Custom beats it every time. If you’re dressing to impress, you’ve got to go for the tux.