X
This site uses cookies to provide and improve your shopping experience. If you want to benefit from this improved service, please opt-in. Cookies Page.
Accept Cookies
Reidys BlogUncategorizedHow to Sound Like – Royal Blood, Drenge, The White Stripes…
Menu
Uncategorized

How to Sound Like – Royal Blood, Drenge, The White Stripes…

Since around when the new millennium broke, there have been a number of big sounding rock bands popping up with just a couple of band members. The White Stripes made huge waves in the early 2000s with their catchy songs, great stage presence and raw sound. Since then, we’ve seen bands come along and prove that more isn’t always merrier, with acts such as Death From Above 1975 and the Black Keys filling a massive sonic space with just two instruments. This kind of sound is bigger than ever at the minute with the likes of Drenge and Royal Blood getting some fairly serious mainstream radio airtime. So, we know it’s popular but how do you get such a big sound with only a couple of members? 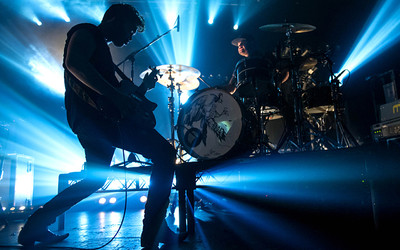 Now if you’re playing some sort of rock music, you’re probably going to be needing a drummer, so that’s half your band already. The other is usually someone playing either bass, or guitar. Whether you’re playing one or the other, there are some little tricks you can employ to get that big, chunky rock sound without worrying that there are some frequencies you’re not filling.

Electro Harmonix Micro Pog – If you’re playing in a band with just one guitarist or one bassist, I implore you to look seriously at the Micro Pog octaver. This little fella will make you sound ten beards strong (yet another technical term). Whether you’re playing guitar or bass, you can dial in as much lower and/or higher octave as you want to fill the void of the missing instrument. Whilst it’s great for adding a bit off beef to your riffs, it’s polyphonic too so you can play chords with it sounding muddy. Dialing in everything at full gives an enormous sound; combine it with a ton of reverb and you can achieve some almost church organ type tones, especially if you use your volume knob. The Micro Pog is on the boards of countless pros and really does help give you a huge chunky rock sound.

Equaliser pedal – The Boss GE-7 for guitar and the Boss GEB-7 for bass means that you can add a 7 band stage of equalisation to your sound. Whether you have it switched on all the time to shape your tone alongside your amp, or whether you use it at certain parts of a song to get a different sound, you’re sure to find some great uses for an equaliser pedal, especially if you’re playing in a band with fewer members. Say if you’re just about to go into a chorus and you want a lift in a certain frequency range, simply dial it in the pedal beforehand and kick it in right when you need it. You can also use it as a volume boost with the level control knob for when you really want to be heard.

Boss Harmonist – While some might think of guitar lines in harmony as a tool used by the likes of Thin Lizzy, Iron Maiden and other classic rock behemoths, being able to add a third or a fifth in places will really help thicken up your sound if you’re the only guy on stage with a stringed instrument. There are all sorts of options with the Boss PS-6 – you can use it as a bit of a whacky sounding pedal if you’re feeling a bit adventurous or just to add a touch more musicality to your sound; either way it’s another way of making your one guitar or bass sound a lot bigger.

Big Muff – If you’re playing big noisy rock, you’ll be be needing some dirt. Whether that comes from your amp or pedals is up to you. And, while there is a huge range of distortion, overdrive and fuzz pedals on offer, many from the the Big Muff range by Electro Harmonix are the go-to stompbox for many who want that extra bit of grit. These pedals are great for this style of music as they can be made to sound really thick, taking up all the room you need it to.

Modulation Effects – Things like a phaser, flanger or chorus pedal can help add something a little bit different to your sound. Whether you want something subtle to kick in for a middle 8 or something that sounds as out there as possible, you’ll find something within these pedals. Using these sparingly can help keep the listener interested in your one guitar/bass part plus they can make for some amazing intros and outros.