We’re well aware that this might not be everyone’s cup of tea but we’re due some limited edition Epiphone Union Jack Sheraton guitars soon. Though not the most subtle of instruments, it’s one of the most striking and memorable guitars you’re ever likely to see (some might say it’s familiar to millions….. sorry). As many of you will already know, it’s loosely based on the Epiphone Sheraton used by Noel Gallagher at Oasis’ legendary Maine Road gig in 1996. Love him or hate him, Noel has really proven himself as a songwriter over the years and perhaps some of that will work its way into your playing with this Union Jack Sheraton.

The guitar, apart from standing out visually, has some great features that make it play and sound great too. First off, it has a pair of Gibson mini humbuckers on board which are bright and focused, great for a range of clean and distorted tones. Noel takes from a wide range of influences, from punk rock to pop and the Union Jack Sheraton can handle it all. As if the Union Jack finish wasn’t enough, the guitar is equipped with gold hardware for extra bling, including the unique Frequensator tailpiece which is a really nice touch. The neck profile is a really comfortable 1960s Slim Taper making light work of barre chords and lead work. To keep it safe and sound on the road, every model is shipped with a hardcase as well as a certificate of authenticity. 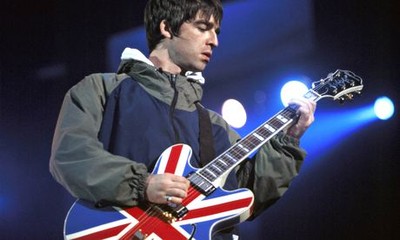 The Epiphone Union Jack Sheraton will sit nicely in the arsenal of a number of players; whether you’re starting out as an indie-rock player or you’re co-fronting the UK’s biggest Oasis tribute band, you’ll look and sound the part with this guitar. It’s equipped with some really high quality hardware and USA Gibson pickups, it comes with a decent hard case and it’s at a reasonable price of £669. A fantastic guitar; a real wonderwailer.

We are truly sorry for that last pun.