Gretsch have added another series to their lineup of electric guitars. The Gretsch Streamliner range offers players the classic look, sound and feel that the company is famed for, at the most affordable price yet. They’re versatile instruments ideal for someone’s first guitar, or indeed as another gem in an already established collection. Think modern features, but with vintage styling that’s very typically Gretsch. 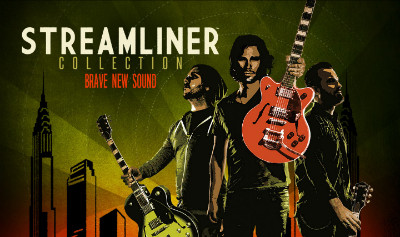 Gretsch guitars have been played by some of the biggest names on the planet including rock n roll legends Brian Setzer, Eddie Cochran and Bo Diddley as well as George Harrison, John Squire, Lou Reed, Pete Townshend, Chet Atkins, Bono and countless others. Gretsch guitars are often favoured by rockabilly players because that’s what most of the genre’s poster boys have played, plus the sound and look was right. Gretsch hollowbodies give a great full-bodied sound, with plenty of warmth and, when put through an overdriven valve amp can give the perfect bite. Jazz players often love the warmth and smoothness of the pickups and rock players like the huge sonic space they can fill. Basically, Gretsch guitars are the business. 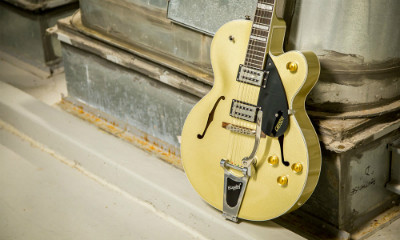 As with many dream guitars, a Japanese built Gretsch such as the White or Black Falcon or the Tennessee Rose is usually in the £1000s. The Korean built Gretsch Electromatic series helped players who wanted one of these legendary guitars at a lower price; you don’t quite get the same tone, definition or build quality as you do with the Japanese models but they’re still fantastic. The new Gretsch Streamliner range takes this affordability a step further and allows a budding player to have a real Gretsch as their first guitar. 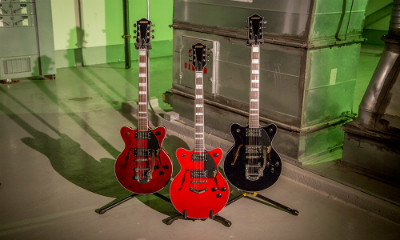 The Gretsch Streamliner series essentially comprises of three models, the Centre Block, the Center Block Junior and the Hollowbody, all of which are dripping in classic Gretsch aesthetic. They’ve all got the F-holes which not only makes it look the part but adds to the guitar’s resonance, they’ve got the classic Gretsch wiring and knob layout, a comfortable, fast-playing neck, plus some lovely, big, vintage style fret markers and the Gretsch logo on the headstock (without a Streamliner logo). All three models are available as either a hardtail model or with a Bigsby vibrato tailpiece. The Center Block is also available as left handed.

To get a Gretsch at this price point is great; it enables players of all budgets to get the guitar they’ve always wanted. The Streamliner series features a brand new pickup; the Gretsch BroadTron. This is a high output pickup that can cater for the modern player as well as those that want the guitar sounds of days gone by. It’s been specifically designed for the Gretsch Streamliner series so that it delivers all frequencies clearly and with the right amount of attitude and punch. Whether it’s rock, punk, country, jazz, blues or pop you’re into, I’m sure you’ll find one of these guitars right for you.

This is a double cutaway semi acoustic guitar with a wooden block running through the middle of the body. This reinforces the top of the guitar and also prevents unwanted feedback. If you’re a rock player with gain dialled into your amp, this centre block helps keep your tone in your control – you keep the resonance from the semi hollow body, but you eliminate the annoying feedback that you might get without it. The guitar features a comfortable and thin U shape neck profile and a unique V shape tailpiece. The large body will suit players who want to make a big impact visually, as well as tonally. Available models are the G2622, the Bigsby fitted G2622T and left handed G2622LH.

The Center Block Junior is so called because it’s a slightly smaller version its bigger brother, the regular Center Block. It’s a great option for those who might find the other a little too big. The Gretsch Streamliner Center Block Junior is still a full sized guitar and delivers much of the same big-bodied tone and is just as suited to rock as it is to country. There’s something about the look of the Centre Block Junior I really like; there are hints of a few classic guitars in there but it’s still very much a Gretsch. Available as the regular G2655 or the Bigsby fitted G2655T.

When I think of Gretsch, this is the kind of body shape that immediately comes to mind. It’s quite wide at the lower bout as well as being pretty thick; this gives the guitar’s tone a lot of depth and warmth. It resonates amazingly, and you hear it both when plugged in and acoustically. The Gretsch Streamliner Hollowbody would make for a great option for someone’s first electric jazz guitar, or indeed as a backup guitar for an experienced player. The neck pickup delivers a lot of that classic, dark warmth and the bridge pickup brightens up the tone nicely. With these new BroadTron pickups being pretty high output, it also means that the Gretsch Streamliner Hollowbody can also be used for blues and rock amongst other styles, as well as jazz. Available as the G2420 or the Bigsby fitted G2420T.

The new Gretsch Streamliner series represents amazing value for money. Players looking for their first electric guitar can now have the Gretsch they’ve been dreaming of. For the money, they’re well built and they play very nicely. The sound, whilst not as refined as the more expensive models, is still clear and very much in line with what we’ve come expect from this legendary guitar company. Personally, I found that both the Center Block and Center Block Junior are great for blues, rock and indie whilst the Hollowbody is a very good jazz guitar but can also handle blues, country and rock too. The Streamliners have got the look and the sound and mean that players who might have been looking at an Epiphone or a higher end Squire now have another option to consider.