This is an update on the incredibly popular Epiphone Special II model. The new Epiphone Les Paul Special VE range has a great vintage worn finish plus there are more colours available; choose from ebony, cherry, heritage cherry sunburst, walnut and vintage sunburst. The body is made from poplar which is great wood for this kind of guitar as it’s lightweight meaning that beginners won’t have to bare the weight of a heavy guitar whilst they’re getting to grips with the instrument. The new Les Paul Special VE features the now classic setup of an Epiphone 650R humbucker in the neck position and the slightly hotter Epiphone 700T at the bridge. This means you can go from warm, clear tones to bright, aggressive lead sounds at the flick of a switch. 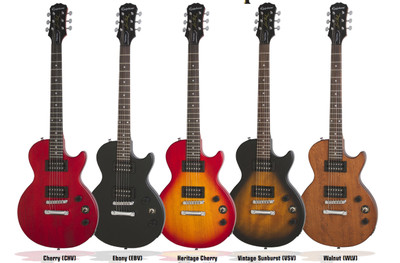 The new Epiphone Les Paul Special VE gives you pretty much everything you associate with the classic guitar at the very affordable price of £119. The Les Paul has been played by nearly every great rock and blues player – Jimmy Page, Slash, Eric Clapton, Joe Bonamassa, Zakk Wylde, Joe Perry and many more. It’s a fantastic option for beginners, but the sound, build quality, playability and classic design will also attract more experienced players – need a backup for your Gibson Les Paul at gigs? The new Epiphone Les Paul Special VE could be the way to go!

I love the 60s Epiphone Century guitars so I’m really glad they’ve reissued this. Used extensively by James Bay, Epiphone thinline archtops have slowly become more and more popular over the last few years. The new ‘Inspired By’ 1966 Epiphone Century, armed with a single P-90 Pro pickup will give you luscious earthy, woody tones great for jazz, country and pop. Stick it through a slightly overdriven amp and you’ll get incredible rock and blues tones too. The pickup is very responsive to your playing and is designed to closely match the P-90s of the 50s and 60s. The F-holes allow the 66 Century to resonate wonderfully, both acoustically and when plugged in. The look of the guitar is also simple and elegant and is available in both cherry and vintage sunburst finishes. 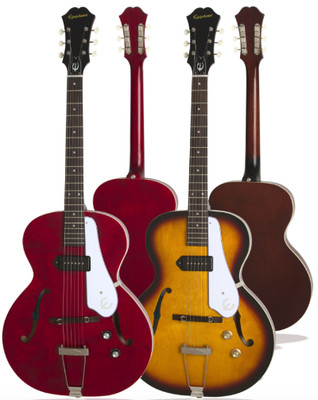 The Epiphone ‘Inspired By’ 66 Century is great addition to the Epiphone lineup – it gives players who want something classic looking and indeed, classic sounding, an affordable option, without having to trawl the internet in search of an original. The use of this kind of guitar in contemporary pop music also means the timing of the arrival of the Epiphone 1966 Century is perfect – a new wave of younger players appreciating classic guitars can’t be a bad thing!

A remake of a classic. Before 1957, all Les Pauls had P-90s and the new Epiphone 1955 Les Paul Custom faithfully adheres to this with a pair of Gibson USA Soapbar P-90 pickups. These pickups, paired with a mahogany body, give you a classic tone, suitable for a wide range of music. Whilst it might not be the best option for metal (probably best to look at the Les Paul Custom with humbuckers for that), it can cover rock, blues, pop, jazz, soul – pretty much anything. For the money, the Epiphone 1955 Les Paul Custom represents amazing value – the build quality on these instruments is very impressive, plus you’re getting genuine Gibson USA pickups at a great price. The 55 Custom sports the classic ebony finish with gold hardware, an ebony fingerboard, 50s style Rounded-C neck profile set into the body and the stylish diamond headstock inlay.

I’ve always loved Les Paul Customs and so I think the addition of the 1955 model to the Epiphone range is a great move. It’s worth noting that this guitar is a limited edition so if you fancy one, move quickly as they do tend to go. The guitar also comes shipped with a vintage style hard case.