Since its release, the PRS Silver Sky John Mayer signature model has been subject to much debate on the internet. The reaction has been very mixed – some people are queueing up to get one; others don’t seem as keen. Many of the negative comments online have been slamming PRS and Mayer for ‘just copying a Strat’ – John Mayer recently put out a video addressing these things, which you can watch here:

First off, he’s not scared to use the F word – Fender, that is. He acknowledges that the PRS Silver Sky is based on a Strat. He and Paul Reed Smith weren’t trying to pass off the hotly debated signature model as a new design – it’s a Strat reimagined for the 21st century. Part of the thought process behind the Silver Sky was ‘what would the guitar be like, if it was designed now instead of in 1954?’. It’s a way forward; not a revision of the past. The finishes also reflect its modernity – the four colours are based on Tesla finishes (new colours could also be in the pipeline for the future). The Strat has been around for some time now so Mayer wanted to evaluate its validity – which parts are still valid and which parts could do with an update? His new signature PRS is his, and Paul’s vision of that. He also doesn’t want the Silver Sky to replace Fender guitars – they’re designed to co-exist with Fender, Gibson and any other guitars.

He describes the Silver Sky as a ‘higher definition Strat’ and being ’hyper-expressive’. A lot went in to the new 635JM pickups. He and Paul kept tweaking them until they were perfect – part of the reason why it was two years in the making. He talks about how the pickups are based on 63/64 Strat single coils, but with some of the harsh treble frequencies taken out, and some extra lower ones added in – “the high end has low end and the low end has high end” I.e. these are very balanced and musical pickups.

Maintaining consistency in each model was an issue for Mayer. He describes how two or three out of 100 Strats can be magic. Due to PRS’s high-precision manufacturing techniques, each Silver Sky is designed to have the same magic as the next. Every neck will feel exactly the same and each pickup set will sound like Mayer’s – he uses a completely mod-free, stock model; so the sound he gets, is the sound you’ll get. He also dismisses the popular misconception that guitars with a 7.25″ radius will choke out when you bend the strings – if it’s set up properly, you can bend all you like, as he demonstrates. Every Silver Sky will receive the peerless PRS treatment before they ship so they will play great. 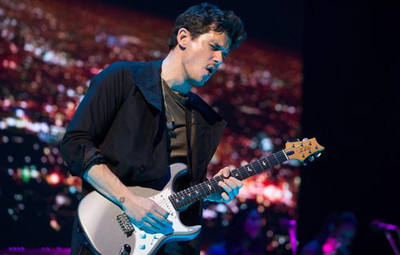 Mayer also addresses his reasons for leaving Fender and going to PRS. He stresses that he’s not endorsed by PRS in the way some people think he is – he doesn’t get paid for this, it’s purely out of his passion for guitars. He claims that it was difficult to speak to the right person at Fender about his vision, and contrasts that with being able to call Paul Reed Smith directly and openly discuss creative ideas.

I can completely understand why Mayer did this video. The PRS Silver Sky is an amazing guitar – it’s as simple as that. Yes, it’s based on a guitar that already exists but this one was designed with a contemporary approach, from the ground up. People are asking why it took two years to put a PRS headstock on a Strat but there’s so much more to it than that. The changes are so minute and so gradual that it took time, every inch of it was thought about – the end result is a guitar that feels comfortably familiar, but different enough to pave its own destiny. The PRS Silver Sky feels and sounds exactly like what it’s supposed to; a reimagined, modern Strat.