Ed Sheeran is well known for playing Little Martins and with the release of his last album, X, it semmed like the perfect opportunity for the two to team up on a new signature guitar. This new Ed Sheeran Signature X Little Martin is a nice merge of tradition and heritage from Martin and a very contemporary aesthetic, courtesy of Ed Sheeran.

We’ve had the Ed Sheeran Signature X Little Martin guitars in stock before but they fly out that quickly that this is the first time we’ve been able to spend some time trying one out properly. So, here is our review of the Martin Ed Sheeran X Signature Edition electro-acoustic guitar.

It’s a surprisingly loud guitar, given that it’s only 3/4 size. It’s very dynamic and responds well to a variety of right hand techniques so whether you’re bashing away at it with a plectrum or you’re lightly fingerpicking, the Ed Sheeran Little Martin puts out exactly what you put in. The sound is clear and quite bright, largely thanks to the solid spruce top. It’s also worth noting that this guitar will sound better with time, as the solid top ages. Whilst you don’t have the deep bass response you’d get from a full size dreadnought, it’s still not bad at all. Your top end rings out nice and clear but the lower frequencies are certainly still there, adding a nice complexity to the overall tone.

The Ed Sheeran Signature X Little Martin sounds fantastic plugged in. It’s got a Fishman Isys preamp on board that features a tuner, volume control and contour and phases switches. These last two can make a big difference to your sound. The contour switch acts as an EQ when pressed – it boosts the treble and bass frequencies giving it a big, full sound. The phase switch gives you a bit more bass at lower volumes and helps supress feedback when you’re louder. I preferred the sound with both switches pressed down. It’s a really nice sounding guitar through an acoustic amp; it still sounds how it does acoustically but gives you the option of boosting some of the frequencies which helps fill the sound out – it certainly doesn’t sound like a smaller guitar!

It’s easy to play for anyone. It comes set up from Martin with a set of Lifespan SP strings on. The Little Martins have a smaller scale and the Ed Sheeran Signature X is no different, so if you’re a young beginner just starting out, this a good option as it will mean that your hands will have a little less stretching to do.

Now, does this mean that players with bigger hands who are used to full sized guitars won’t feel comfortable with it? No, it doesn’t. I’m a pretty tall male adult, I usually prefer big, chunky necks on guitars, and playing this was easy. It doesn’t feel identical to a full sized acoustic, but it shouldn’t. There’s no problem fitting in all the notes into any chords, and the string spacing feels fine. Whilst I do prefer the feel of a full sized scale, this would be perfect to take travelling as it’s much more portable and still plays great.

The Ed Sheeran X Little Martin might also make for a good choice for electric players that want an acoustic guitar with a smaller nut width. Going from say, a Strat to this won’t feel worlds apart and may provide a nice alternative to a full size acoustic.

What I like about the Ed Sheeran Signature X Little Martin is that they’ve been quite subtle with the look of it. It might have been tempting to plaster giant X’s all over it but they’ve refrained. The fret markers are small green X’s on the neck which stand out, but not too much. The Martin logo is in green, like his album artwork and features an X and ‘Est. 1991’, celebrating the birth year of the pop titan. On the body is a nice inlaid X made from koa which compliments the solid sitka spruce top and the high pressure laminate koa back and sides. Overall, it’s a nice, natural looking guitar. Whilst the Ed Sheeran fanatics out there are going to love it, you don’t have to be his biggest fan to getting away with playing it. 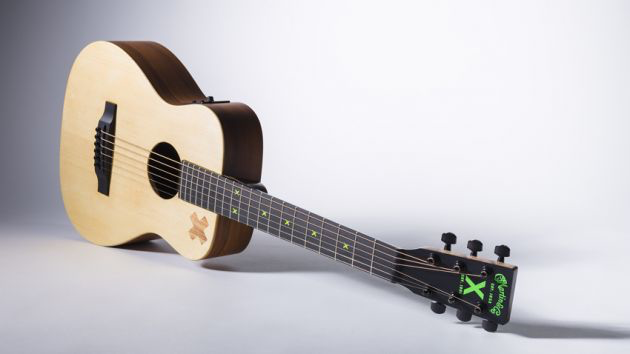 It’s a Martin. Any Martin guitar is a safe bet with regards to quality. These particular models are Mexican built and and from the few that I’ve seen in person seem to be very well made. Martin have obviously put a lot of effort into making these new Ed Sheeran Signature X Editions and will give players years of enjoyment. They also come shipped with a decent, padded gigbag which will help keep your guitar in the best nick.

The Martin Ed Sheeran Signaure X Edition is ideal for a whole range of players. Its smaller size lends itself well to players that are smaller in stature, or with small hands. It makes for a nice beginner guitar as the stretches will be easier to pull off and experienced players looking for a portable guitar will like it too. It’s a nice guitar to have lying about the house for songwriting, though the on board pickup and preamp means that it’s perfectly suited for gigging as well. Acoustically, it sounds great; clear and responsive. Though it may lack some of the projection and bass response you’d get from a larger guitar, what you can get out of it is a nice surprise. Plugged in, it’s a delight – the feaures on the preamp give you the ability to tailor the sound to your liking. You might have seen Ed Sheeran playing these guitars live during his shows. The album that inspired this model, X, has a number of accolades; being certified as platinum seven times over is just one of them. So, if it’s good enough for him…