Roland have unveiled a new, luxurious range of digital pianos, bursting with ground-breaking technology that will help bring the sound and feel of an acoustic concert grand piano into your living room – the LX700 series.

These are beautifully designed instruments that make a huge visual impact in any room. They’re made with serious players in mind, though also cater for beginners. With outstanding playability and sound production, pianists who are used to an acoustic piano, or even a grand piano will instantly feel at home with the Roland LX700 series

The Roland LX700 series consists of three models – the flagship LX708, the LX706 and the LX705 – we’ll go through what separates the individual models later but first, what’s new about the LX700 range as a whole?

All of the LX700 pianos have a new sound engine on board, improving on the previous SuperNATURAL technology. The LX700s faithfully replicate the sound of some of the finest acoustic grand pianos in the world. The two main piano sounds are based on European and American concert grands, giving you two very rich, complex and distinctive tones.

There are many physical components that make up an acoustic grand piano which, when played, interact with one another resulting in the sound that you hear. The technology onboard these Roland LX700 pianos digitally recreates these resonant mechanical noises, making for a really authentic experience. When playing a grand piano, what you hear isn’t just dependant on what key you’re pressing down. How many notes you’re playing, how hard or softly you’re pressing them down and how you’re using the pedals all contribute to the sound that reaches your ears. It’s the same with any of the three Roland LX700 pianos, so not only is it an authentic playing experience, it’s also one of ultimate expression.

All the models in the Roland LX700 series have a multiple speaker system that projects certain sounds from certain areas (the further up in the range you go, the more speakers you get), giving the impression that you’re acutally sat at a grand piano! You even get this when using headphones, utilising their Headphone Acoustic Projection technology, making it easier to get lost in music, no matter how late at night it is. This all works hand in hand with the new sound engine to make sure what you play with your hands matches perfectly with what you hear from the speakers, or headphones.

Not satisfied with having a truly outstanding piano sound, Roland have also created digital impressions of the space around it i.e. the venue that you’re playing in. Match the American grand piano to a small lounge space and you’ll get smoky jazz club vibes immediately. You’ve got a good selection of spaces to choose from – cathedral, concert halls, recording studio and more. The result is a richer sound, that seems to envelop the player. How the instrument reacts with the space around it can also inspire you to take your playing somewhere new.

To complement a great sound, you need a great action; that is, how the keys play and feel under your fingers. For two of the models in the LX700 range (706 and 708), Roland have created a brand new action – Hybrid Keyboard. This is the closest they’ve got to the feel of a grand piano yet. It’s got a longer key than most other digital pianos so you don’t have to put quite as much pressure on the key – good for your hands during long recitals, but it also means it feels more authentic, adding further to your playing experience. 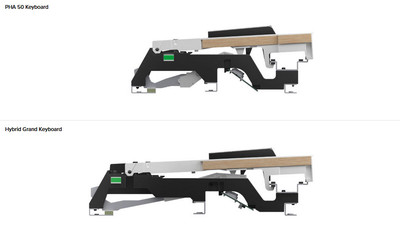 The Roland LX705 is fitted with their PHA-50 action, which up until Hybrid Grand, was their top of the range action, so is still very good! If you’re doing pianos exams, playing a Roland LX700 series piano (particularly the 706 and 708) at home will mean you won’t have to adapt your technique when it comes to sitting your test.

The top-of-the-range LX708 has a new and improved damper pedal system also. While many digital pianos allow for half-pedalling, the LX708 gives you more control over tone decay. Not only this, but the actual resistance you feel whilst pressing it down has been designed to better replicate the feel of an acoustic grand piano. 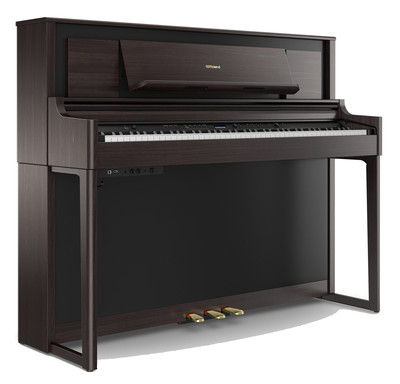 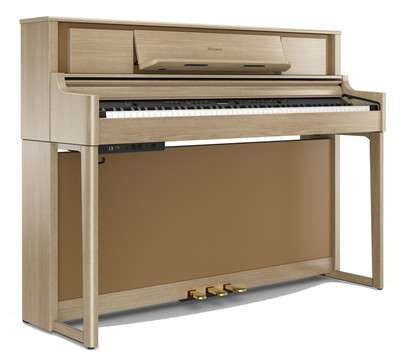