X
This site uses cookies to provide and improve your shopping experience. If you want to benefit from this improved service, please opt-in. Cookies Page.
Accept Cookies
Reidys BlogUncategorizedWhat Are Modelling Amps and How Do They Compare To Valve Amps?
Menu
Uncategorized

What Are Modelling Amps and How Do They Compare To Valve Amps?

If you’ve ventured into the world of electric guitar amplifiers in the last ten years or so, chances are, you’ve stumbled upon a modelling amp. Guitar amplifiers have changed so much over the last half century and, as technology further advances, we see the evolution of the amp progressing at an even faster rate, particularly with modelling amps. While many may argue that guitar amps don’t need to be improved upon (and there is some truth in that – the Marshall 1959 Super Lead is 50 years old and there aren’t many that beat it), these advancements in guitar amp technology mean that an incredibly wide range of tones is available to more players at a more affordable price. 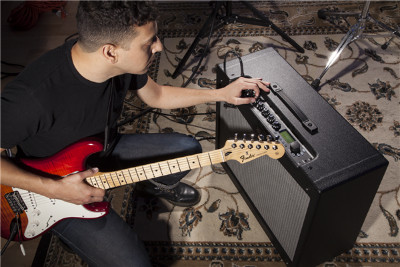 So what actually is a modelling amp? Well, it’s an amp that models itself on other, more expensive amplifiers but keeps the price ticket way below than what you’d pay for the real thing. Expensive and/or legendary guitar amplifiers, such as the Vox AC30, Marshall JCM800, Fender Twin Reverb and the Orange Rockerverb all get their distinctive tone from their valves and how they are wired. Modelling amps replace all these valves and analogue circuitry with digital technology to emulate how these classic amps behave and do their best to deliver a sound that’s as close as possible to that holy grail valve tone.

Many modelling amps give you a selection of classic amps to choose from. So, whether you want the clean sparkle that Fender amps are famous for, or you want the enormous chunk of a Mesa Boogie style distortion, a modelling amp will usually give you both, and everything else in between. Typically, you’ve got different amp styles to choose from, as well as volume and gain controls and some sort of EQ stage so you can really shape your tone to your liking. Many modelling amps also have a load of effects on board too such as delay, reverb, chorus, phaser, flange, even different types of distortion which means you don’t have to buy individual pedals to add texture to your sound.

Are Modelling Amps As Good As Valve Amps?

If modelling amps recreate the sound of expensive valve amps, then why spend the extra money? Well, as far as guitar modelling amps have come in recent years, they have yet to really accurately model exactly how a valve amp reacts. Experienced musicians can just… tell. A valve amp reacts and responds more dynamically, plus there’s just something so natural and organic about the distortion that comes from driving valves. There’s a reason why most pros out there on the big stages are using valve amps, however, when you put a big noisy valve amp in home situation, it can be a little different. A valve amp needs to be driven (i.e. turned up) for the valves to get working and to give it that distinctive sound, on the other hand, a modelling amp will give you a valve-style tone at a lower volume or even through headphones meaning you don’t get as many complaints from the neighbours… in theory! 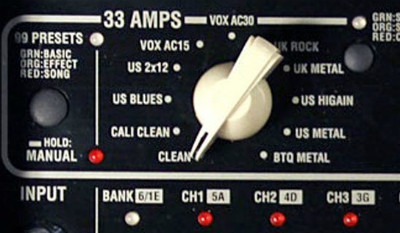 Some of the different amp types available with a modelling amp

Modelling amps do have their place and in certain circumstances, can be a better option than a valve amp. A decent modelling amp will give you more options – you’ve got a clean channel, then all sorts of overdrive and distorted channels. Where a valve amp might have one or two channels, it’s not unusual for a modelling amp to have more than double that. Many also boast the ability to programme and save your preferences into a channel so you can call your favourite settings up at the touch of a button. If you want a really wide range of tones available in one amp, then a modelling amp could be a great choice.

Modelling amps can also be really good for beginners as it’s a practical way to learn about the different kinds of amps that are out there and what sort of tones a particular amp will give you. You can experiment with all the different settings whilst learning and then after a while, find out a little more about what kind of sounds work for that particular player. For example, a Vox AC30 might not be the best amp for a metal player, just like a Triple Rectifier might not be greatest option for a jazz guitarist. Most modelling amps will give similar sounds to both of these so players can try out everything and see what works for them. With this knowledge beginners can then start looking for the perfect valve amp when it’s time to really nail their desired tone. 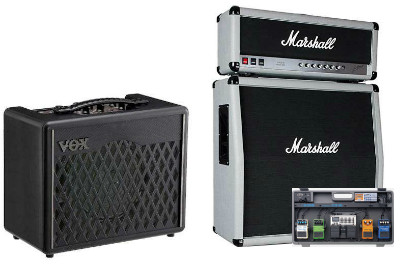 Portability: A modelling amp vs a valve half stack plus pedal board.

Modelling amps with built in effects also have the advantage of being more portable. A lot of players will use individual pedals (from as few as one or two, to dozens) alongside their valve amp. All this equipment can become quite cumbersome, especially if you’re moving around a lot. What I’ve done in the past is leave my main rig i.e. valve head, cab and pedals at a rehearsal space and then use a modelling amp at home. It’s small enough so can go anywhere in the house, plus with all the on board effects, I can get similar sorts of sounds as I would with pedals.

Which Modelling Amp Is the Best?

As I’m sure you can probably guess, there is no ‘best modelling amp’ out there. There are many great different options available. The modelling amp that I think gives a pretty close replication of a valve amp is the Blackstar ID TVP series. Rather than selecting an ‘amp’ to model, the ID series lets you choose what kind of valves to use, with each one having a different tonal characteristic. This is a novel way to model as it’s a more hands-on approach and opens a wide range of sounds available, from crisp and bell like cleans to big bodied, powerful distorted tones. You’ve also got delay, reverb and modulation effects built in.

Another best seller is the Vox VX II. This uses both digital and analogue technology to give you a close representation of some classic amps. It’s got 11 different famous amp models as well as eight on-board effects, plus you can programme your own channel presets to make switching between different sounds easier than ever.

Fender’s offering, the Mustang allows you to get those famous Fender cleans, as well as more high gain sounds that you might normally associate with other brands. They’re versatile and have an enormous range of amp types and digital effects. You can get some really unique and different sounds out of it, plus you can get everything from the bedroom-friendly sized 20 watt Mustang I, to the stage-ready Mustang V half stack.

So whilst the tone quality might not be as desirable that of a valve amp, modelling amps certainly do have their uses. They’re extremely versatile, offering players a massive range of sounds, plus they’re more portable as they’ll often have a variety of built in effects – perfect for the home. They’re also substantially cheaper than most valve amps so they’re a fantastic option for beginners and players on a budget. Many modelling amps also offer the ability to connect to your computer so you can further tweak your sound to your liking. As the years pass by, we keep seeing neat little improvements and additions to modelling amps so I’m pretty optimistic about their future. Whilst I’ve yet to hear a modelling amp that could genuinely replace my favourite valve amp, I do think that innovative amp designers might soon be coming very close!