X
This site uses cookies to provide and improve your shopping experience. If you want to benefit from this improved service, please opt-in. Cookies Page.
Accept Cookies
Reidys BlogUncategorizedYamaha Clavinova CLP625 VS CLP635: What Is The Difference?
Menu
Uncategorized

Yamaha Clavinova CLP625 VS CLP635: What Is The Difference?

In this series of articles, we’ll be looking at all of the pianos within the Yamaha CLP600 Clavinova range and comparing each model with its closest upgrade. In this case, it’s the CLP625 vs the CLP635 – both have the GH3X keyboard action and the amazing CFX and Bosendorfer grand piano sounds. Of course there are differences between them, but what are they and which piano better suits your needs? Here’s a quick comparison of some of the major spec points.

What Are The Differences Between The CLP625 and CLP635?

Whilst the CLP625 and CLP635 do share some of the same features, there are some major differences that justify the price difference. One of these is Virtual Resonanace Modelling (VRM) and for me, it’s a big one. VRM was previously only on the CLP575 and above. This time they’ve updated and improved it, and it features on the CLP635 upwards. 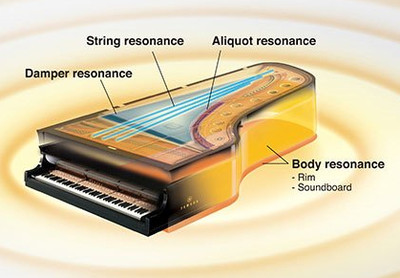 When you play an acousic piano, the key triggers a hammer which then strikes a string and produces the desired note. A by-product of this is that other mechanical parts of the piano vibrate and produce very subtle sounds – other strings also resonate slightly and produce harmonics. There are no strings in a digital piano, so VRM digitally recreates all of this resonance, producing an incredibly rich and full piano sound, like you would experience if you were sat at an acoustic grand piano. You’ve also got control over how much of this resonanace you hear, and adjust things like reverb type and depth within the ‘Piano Room’ settings. VRM is probably the biggest reason why you get a richer sound from the CLP635, over the 625.

As the above table shows, the CLP635 has bigger speakers and more powerful amplifiers. This means that the 635 can go louder than the 625. Now, if you’re just playing at home, the volume on any of the Clavinovas won’t be an issue but if you’re playing somewhere that needs a bit more volume, then the CLP635 does have the edge. 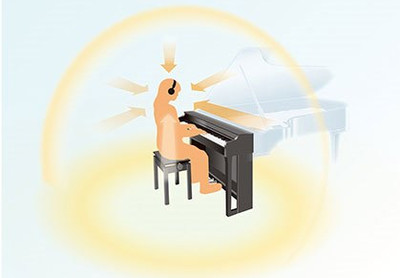 Extra volume isn’t the only benefit of having bigger speakers and amps. You also get a better dynamic range – that is, you can play more expressively, with your soft notes, or pianissimo, sounding very soft and your loud notes, or forte, sounding really strong. The bass response with bigger speakers is also more impressive.

The CLP635 has got more voices, or sounds, than the CLP625. They both share the main piano tones i.e. the Yamaha CFX and Bosendorfer grands, but the 635 has a total of 36, as opposed to 10 on the 625. Some of these include genre specific piano sounds e.g. jazz and rock, and various organs and electric pianos. Having these extra sounds allows you to be a bit more creative and may take your playing in a new direction. The 635 also gives you 20 rhythms to play along with – these, like a metronome help you play in time and can inspire you to play in a different style or genre. 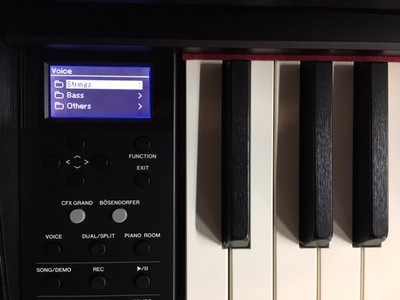 One of the many advantges of a digital piano is how easy it is to record. The CLP625 lets you record one song with two tracks – for example, you could record the left hand then overdub the right hand. The 635 lets you record 16 tracks and a whopping 250 songs. Also, the connectivity on the 635 allows for more recording options. It has both USB to Host and USB to Device connections – with these you can go straight from the piano to your computer, or record on to a USB stick. The 625 has USB to Host, so you can record to a computer with that (or use it as a MIDI controller). 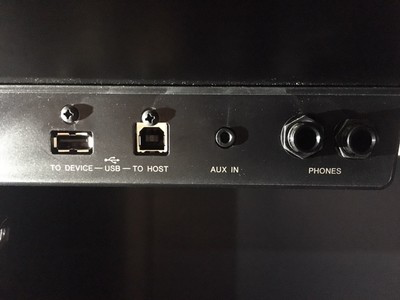 What’s also handy on the CLP635 is the AUX output – this allows you to connect the piano to bigger speakers, say, a PA system if you’re playing a gig. It’s also another option when it comes to recording. Plus, there’s an AUX in so you can plug in your phone or MP3 player and play along with your own music.

There are a few more smaller differences between the CLP625 and 635 but the above points represent the major reasons why you might buy the upgraded model. For me, the biggest reason to upgrade is VRM – this helps the 635 sound richer and fuller – basically, more like an acoustic piano! The bigger speakers and amplifiers also contribute to a slightly better sound, and having the option to play with more sounds and rhythms is also useful. Connectivity-wise, the 635 gives you more options there, though if you simply want a piano to play at home – no recording or plugging into bigger speakers, then the 625 will see you right there.