X
This site uses cookies to provide and improve your shopping experience. If you want to benefit from this improved service, please opt-in. Cookies Page.
Accept Cookies
Reidys BlogUncategorizedYamaha Clavinova CLP645 VS CLP675: What Is The Difference?
Menu
Uncategorized

Yamaha Clavinova CLP645 VS CLP675: What Is The Difference?

If you want to know the differences between the CLP645 and CLP675 Clavinovas, then you’ve come to the right place! Though these two digital pianos sit next to each other in the CLP600 series, there are a few features that really set them apart. They both share the same sound engine, so you get the incredible tones of the Yamaha CFX and Bosendorfer grand pianos, amongst a whole host of other different voices. Both the CLP645 and CLP675 have the technology on board to make them sound like an acoustic grand piano; the main difference however, lies with feel.

What Are The Differences Between The CLP645 and CLP675?

The CLP675 is the first Clavinova in the 600 series to feature GrandTouch. GrandTouch is Yamaha’s first brand new keyboard action in 21 years and showcases two decades’ worth of research into transferring the feel of an acoustic grand piano into a digital piano. First of all, it’s got the longest key length of any digital piano currently on the market (true at time of writing). The longer distance between the edge of the key and its pivot point means that it requires less strength to push down – it also makes it possible to play with more expression and dynamics – something that’s required later on in the piano grades.

The NWX action on the 645 is fantastic – the wooden keys do feel like those on an acoustic piano, but the way that the keys move on the 675 is even better. The GrandTouch action more authentically reproduces the feel of an acoustic grand key as you strike it. This will mean less discrepency in feel when going from an acoustic piano in lessons to your digital piano at home. Even the way the key returns to its original position is more authentic too – again, great for those that want a digital piano in their home that feels and reacts like an acoustic one. GrandTouch does give the CLP675 an edge over the 645.

The CLP645 Clavinova has weighted keys where the bottom keys feel heavier tham the top ones, like you’d find on an acoustic piano. However, these keys are weighted in groups – the first {X} amount of keys will have one weight, the next lot will be slightly lighter and so on. The CLP675 has 88 linear graded keys i.e. every single key has its own individual weight. 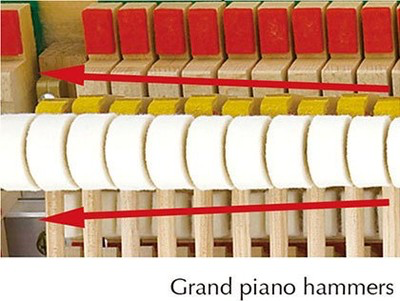 While the CLP645 has two sets of two amps and speakers, the 675 has two sets of three. Every time you upgrade within the Clavinova series, you get an improved, and louder speaker system. Firstly, this gives you more volume, should you need it. Secondly, and arguably, more importantly – it gives you more headroom. That means that even when you’re playing at quieter volumes, the sound is a little clearer. It also gives you a better dynamic range, so when you’re playing very softly and very loudly, the speakers better represent this.

The CLP675 is the first in the range to feature a three-way speaker system. Each speaker on the piano is carefully calibrated to hit your ears with the right frequencies and incredible sound quality. The sound from this three-way system is richer and fuller than the two-way on the CLP645.

Another feature that starts with the 675 is the GP Reponse Damper Pedal. On a grand piano, the right hand pedal (often referred to as the sustain pedal) doesn’t simply work as ‘on’ or ‘off’ – there are gradients. Think of a dimmer light switch – between the light being switched off and it being lit full, there’s quite a range of light you can get from. The GP pedal works in a similar fashion – the graph below gives you an idea. What does this mean it terms of picking your Clavinova? It means that the sustain pedal on the CLP675 is more like a grand piano and that you can use it to add more expression in your playing. 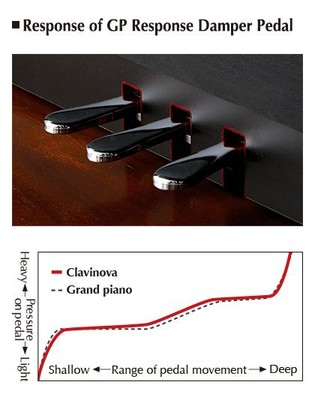 The biggest difference between the CLP645 and CLP675 is definitely GrandTouch. Yamaha’s new keyboard action is the closest they’ve got to the feel of an acoustic grand yet. This, combined with each of the 88 keys being individually weighted and the GP Response Damper Pedal makes for an authentic playing digital piano. Sound-wise, the three-way speaker system on the 675 gives a slightly richer and fuller tone, and, with it being more powerful, you’ve got a bit more volume – handy for playing in bigger rooms. Both of these Clavinovas are serious instruments – either would suit a beginner really well, though the 675 would see them through further. The CLP675 will also be more ideal as a home practice tool for someone more used to playing an acoustic grand piano.