X
This site uses cookies to provide and improve your shopping experience. If you want to benefit from this improved service, please opt-in. Cookies Page.
Accept Cookies
Reidys BlogUncategorizedYamaha CLP vs YDP: What Are The Differences Between The Clavinova And Arius Ranges?
Menu
Uncategorized

Yamaha CLP vs YDP: What Are The Differences Between The Clavinova And Arius Ranges?

Clavinova and Arius are two different ranges of digital pianos made by Yamaha. Anything starting with CLP is a Clavinova and any model starting YDP is an Arius. The two ranges look fairly similar and essentially, do the same thing – that is, they look, sound and feel like an acoustic piano. However – to put it simply – it’s the extent to which they are like an acoustic piano is what sets the series apart, and justifies the price difference.

Let’s go into a bit more detail and look at the differences in feel and sound between the Yamaha CLP Clavinovas and the YDP Arius digital pianos.

The action is what we call the feel of the keys – everything from the actual touch of them, to how they feel when depressed, to how they return to their original position. The action on the entry level Clavinova model – the CLP625, is Graded Hammer 3X (GH3X) and feels more like an acoustic piano than any of the actions within the YDP series. As you go further up in the Clavinova range, the action improves; the CLP625 and 635 have GH3X action, the CLP645 has Natural Wood X action (using real wood for the keys, like on an acoustic piano), and the CLP675 and 685 have Yamaha’s newest and most authentic action to date – GrandTouch. 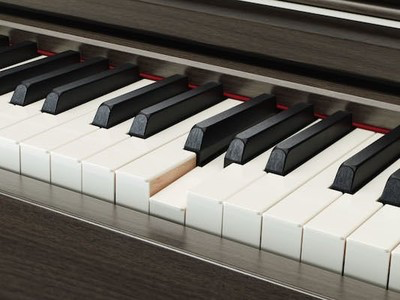 See the wooden keys on the CLP645

All the pianos in both the YDP and CLP series have weighted keys, so you might be wondering how much different all these models can be. Do you really need an action that’s as close to an acoustic piano as possible? To someone just starting out, they might not notice all the subtle differences; an experienced player however, would notice pretty quickly.

A good piano action is more likely to result in a better technique. Most piano lessons and indeed, piano exams will be carried out on an acoustic piano (some exam centres may have a grand) so if you’ve got an instrument at home that feels more like that, there’s less of a discrepancy when you’re going between lessons and practice every week. If you’re really serious about playing the piano, you’ll want the action to be as authentic as possible – subtle nuances like how the key returns to its original position on the CLP685 make it feel more authentic than anything else, thanks to the counterweights in each key. For those that regularly play on an acoustic grand piano, an authentic feel is so, so important.

The sound engine in the YDPs is quite different to those in the CLPs. All the CLP pianos have samples of two of the world’s finest concert grands; the Yamaha CFX and the Bosendorfer Imperial. The YDPs have the ‘Pure CF’ sound engine that samples Yamaha’s CFIII grand piano. Is there a difference? Quite simply – yes. Whilst the piano sound on the Clavinovas, to my ears, is very authentic, there’s no denying that the YDPs do also have a piano tone that beginners could get along with nicely.

If you look at the spec of the Clavinovas, you might notice something called Virtual Resonance Modeling (VRM) on the CLP635 upwards. It’s not on the CLP625 or any of the YDPs. VRM digitally recreates all the mechanical resonanace that you would get if you were playing an acoustic piano – when the hammer strikes the string in an acoustic, you get other subtle nuances, like un-played strings very quietly resonating. The result of VRM is a much richer, organic sound – something that if you play an acoustic piano regularly, you will be used to but may not necessarily be able to explain.

Another difference between the Arius and Clavinova is how their headphone sound. One of the biggest advantages of a digital piano over an acoustic one is the ability to practice silently and the CLP600 series has stepped it up a notch with binaural sampling. To put it simply, when you wear headphones whilst playing any CLP600 piano, it’s as if your sat in the playing position of £100k Yamaha CFX concert grand piano. The sound hits the front of you in wonderful stereo, as it would be if playing an acoustic grand, instead of just directly into your ear from the sample. It’s a strange sensation at first! It makes playing with headphones feel more natural and enables you to do it for longer without ear fatigue. 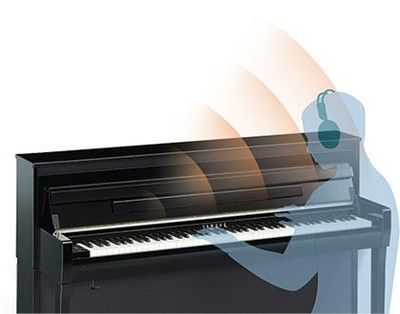 The CLPs also have a higher polyphony. In a nutshell, polyphony is the number of notes that can ring out at once. The YDPs have 192, the CLPs have 256. Now you might think that 192 is a lot of notes to ring out at once, given there are only 88 keys – and you’d be right! For a beginner, this is likely more than enough. However, as you progress through the grades and start playing more complicated pieces, you’ll find that you’re using the pedal to sustain a lot of notes, so the 256 polyphony really comes in handy as notes may start to drop out.

All the pianos we sell include free UK delivery. The YDPs would normally be delivered by a courier so it would be dropped off at your door and would require you to assemble the piano (with the smaller ones, it’s not too difficult – about 30 mins of a job). If you want our experienced delivery team to deliver and install it in your home and take away all the packaging, that is an option (more details here).

I could go into more detail, but the main differences between the Yamaha CLP Clavinovas and the Arius YDPs are outlined above. The YDP pianos are great for someone that wants a weighted keyboard with a traditional piano cabinet design to suit a budget. The YDP143 is Yamaha’s the entry to the market and is a great instrument for introducing the piano to someone with no prior experience. The 163 has a slightly improved action so may go a little further in terms of seeing someone through piano exams and the YDP-S52 is a sleek, modern, slimline digital piano. If you’re after a good quality digital piano, but you don’t know if the player will take to it fully, the YDPs give you that, but mean you don’t have to spend quite as much as you would with a Clavinova.

If however, you know that the pianist you’re buying for is going to be at it for a while or wants the best possible start, the CLPs with their improved action and sound enhancing features will mean that you won’t need to upgrade as soon after. The new GrandTouch action on the CLP675 and 685 is the most authentic yet and will satisfy even the most experienced players.