X
This site uses cookies to provide and improve your shopping experience. If you want to benefit from this improved service, please opt-in. Cookies Page.
Accept Cookies
Reidys BlogUncategorizedYamaha CLP665GP vs Roland GP607: What Are The Differences?
Menu
Uncategorized

Yamaha CLP665GP vs Roland GP607: What Are The Differences?

The following is a guide that outlines the differences and similarities between what are probably the two most popular digital grand pianos on the market at the moment – the Yamaha CLP665GP and the Roland GP607. Both pianos sit around the £3-4k price point and showcase a beautiful baby grand piano cabinet design. It’s worth noting that comparing two instruments such as these from different brands can prove tricky, as they often have different names for the same thing and the differences aren’t always quantifiable. Both are superb instruments, and it may well boil down to personal preference. Here’s a quick rundown of the spec.

Yamaha are known not only for their digital instruments but for their acoustics ones too – you’ll find Yamaha acoustic grand pianos in some of the finest concert halls around the world. As you might expect, they sample some of these to use in their digital instruments so, when you strike a key on the CLP665GP, you’re triggering a recording of a world-class concert grand piano. Each note is recorded a great many times so how softly or hardly you strike the key affects the sound you hear – as would be the case with an acoustic piano. The CLP665GP has two incredible concert grands at the push of a button (amongst other sounds) – the Yamaha CFX and the Bosendorfer Imperial. 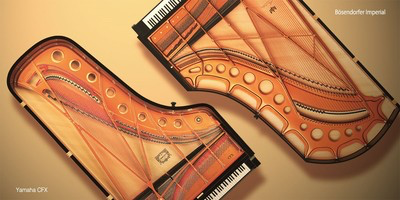 The Roland GP607 creates sounds in a slightly different way. They don’t make acoustic pianos so instead use a variety of different brands to base their digital sounds on. Instead of triggering samples, the GP607 and what they call SuperNATURAL modelling, detects how hard you press the key and, in real time, calculates what piano tone should be generated, allowing you to play with maximum expression.

Both the Yamaha CLP665GP and the Roland GP607 are extremely good quality instruments and have some incredible technology on board – they both produce a sound that is very close to that of an acoustic, though their tones are slightly different. In general, I find the Roland to be a touch warmer and mellower, and the Yamaha a little brighter – neither one better than the other per se; just different.

These two pianos also have different speaker systems on board – various companies have their own ways of ensuring that their amazing technology is replicated properly through speakers. The GP607 has has a 4.1 speaker system which consists of five amplifiers and five different speakers that each take care of different frequency ranges. The CLP665GP has four speakers and four amps, though it does have Yamaha’s ‘Acoustic Optimiser’ which helps enrich the sound. 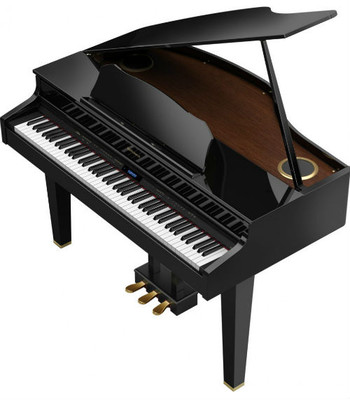 If you want a really wide variety of sounds, in a stylish grand piano design, then the Roland does have the edge – it has 307 sounds on board, as opposed to 36 on the Yamaha (though that’s what the CVP range is for).

Both these pianos features synthetic ebony and ivory weighted keys, with escapement so that they have the feel of an acoustic grand piano. The GP607 has all of Roland’s flagship technology on board, including their PHA-50 action. This is an authentic feeling keyboard action with keys that are made from a combination of wood and plastic – this gives you the feel of an acoustic, but the plastic prevents them from ever warping or needing any sort of service. 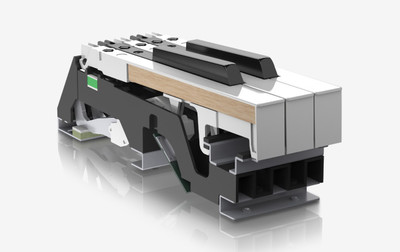 The action on the CLP665GP is Yamaha’s GH3X – there are better key actions within the CLP series, though the GH3X is very good. The keys are made from plastic and have different mechanism inside the piano compared to the Roland. Whilst both pianos offer weighted keys, there is a slight difference in feel, due to the varying ways in which the mechanisms work, and the different used to make the keys.

The Roland GP607 and the Yamaha CLP665GP both have bluetooth (audio) connectivity – you can stream music from your phone or tablet wirelessly to take advantage of the incredible sound system. The GP607 however, does have Bluetooth MIDI connectivity meaning you can transfer MIDI data without using any wires. This is handy for a number of reasons such as recording or, playing along with one of the many built in songs – if you pair it with a phone or tablet and use Roland’s Piano Partner app, you’ll find a whole load of fun and interactive ways to use this feature. Both pianos also come with in-built recording features so you can track one part and overdub it after, as well as many on-board songs to play along with.

Spec-wise, the Yamaha CLP665GP and the Roland GP607 aren’t too far apart. The Roland has more voices on board, and has a few more features, especially when you pair it with the Piano Partner app. Whilst they create tones in different ways, they both sound incredibly authentic and allow players to put expression into their playing. The pianos have a slightly different tonality but neither one is necessarily better than the other – it comes down to what you prefer. The feel of the pianos is also different, as you would expect with different mechanisms and ways in which the keys are made. The GP607 does have an extra amplifier and speaker, but the speaker system in both pianos will fill your room with rich, powerful authentic piano tones. The Roland GP607 has all of their flagship technology on board, whereas you can get upgraded spec further up in the Yamaha CLP range (CLP 675, CLP685 and the CLP695GP), which justifies the price gap between them.

If you need any help choosing which piano is right for you, we’re always here to help and you can rest easy knowing that both of the above pianos come delivered and installed (ground floor) by our own experienced piano delivery team.