X
This site uses cookies to provide and improve your shopping experience. If you want to benefit from this improved service, please opt-in.
More Info
Accept Cookies
Update: Online orders dispatching as normal. Our new Blackburn store is fully open for visits and click & collect
Order before 2pm for same day despatch
Seen It Cheaper? Get In Touch
Finance Available (Selected Items. Subject to Status)
Spring Sale
While stocks last 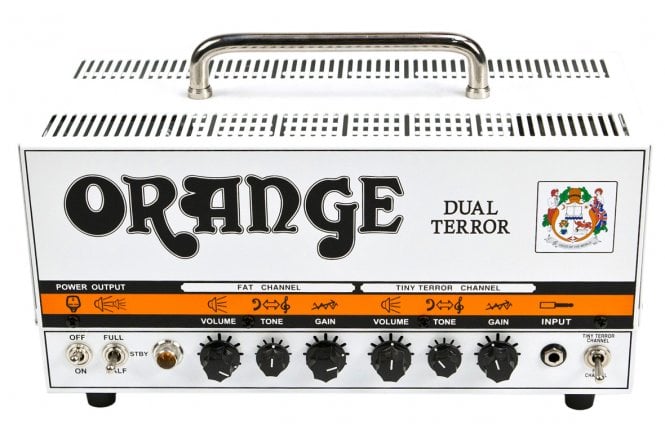 
"I always see the Dual Terror as a supercharged Tiny Terror. It's 30W, as opposed to 15W, so you've got more clean headroom for a start, plus more volume if you need it. Like with many of Orange's amps, you can knock it down to 15, or even 7W, so you can really push the valves without having it too loud.

The first channel is just a 30W Tiny Terror - it's got everything that made the TT one of the best-selling amps ever made (for me, it absolutely nails that British classic rock/blues crunch sound). The second channel, is a fatter, more rounded sound, with a little more gain on offer to tackle slightly heavier tones. I used a Dual Terror live for a while - I'd use the Tiny Terror channel as my main sound (roll back on your guitar's volume to clean up nicely), then I'd use the footswitch to engage the Fat Channel for solos. The amp is so easy to use, and really versatile. You'll see these in studios and on stages all over the world and once you hear it, you'll know exactly why!"

Often imitated, but never equalled, the iconic Tiny Terror quite literally turned the guitar world upside down upon its launch. Heralded by Guitarist Magazine as ‘the most important guitar product in the last 30 years‘. This is the original lunchbox amp head, and continues to set the standard by which all other low wattage valve amplifiers must be judged. Now discontinued, the Tiny Terror lives on through the Dual Terror.

Featuring a 30 Watt output section, the Dual Terror head is the most powerful in the Terror range, offering more clean headroom and volume than the Tiny Terror with the added flexibility of a second channel. The ‘Tiny Terror Channel’ is lifted straight from the original 15 Watt version, retaining the signature tones that made the Tiny Terror such a hit. However, with double the power on offer, it packs an even fiercer punch.

The additional ‘Fat’ channel provides extra girth with its more rounded, slightly gainier character, perfect for leads or for balancing between two different guitars on stage. The Dual Terror switches from 30 to 15 to 7 watts, making it a perfect portable amp head for both for studio and stage.

Combining ultra-portability with an outstanding array of valve tones, Tiny Terror channel delivers an exceptional range of British valve tones made possible with just three controls. A unique preamp section and gain structure goes from clean/bluesy crunch to Punk and Classic Rock, all controllable by your guitar’s volume knob.

The intuitive tone circuit acts as a roll off for the upper frequencies whilst always retaining the character of the instrument, even when driving the amp to its absolute limits. Whilst the philosophy behind the Terror series began with the gigging musician on the move, their huge sonic range, supreme usability and switchable output options has made the the ‘go-to’ amps for studio engineers and producers alike.


This channel builds on the original ‘lunchbox’ amplifier. Its clever design, unique sound and deceptive versatility single-handedly kick-started the low wattage amp craze. It’s appeared on countless stages and been a mainstay in top studios since its introduction. A decade on, it still continues to set the standard by which all others must be judged. This channel gives you everything the Tiny Terror was and more with the 30 Watts of power.


While keeping a compact footprint, we’ve squeezed in the fat channel in for fatter tones, beefier gain to make this one of the most rounded amps available on the market.

I love output valve distortion and, for me, EL84s have the most musical saturation. 15 Watts cranked is the perfect volume to achieve it. The circuit I came up with for the Tiny Terror was designed with that in mind. It’s a unique channel with only three controls – gain, volume and tone – but it gives you everything from clean to pretty ridiculous. The first gang of the gain pot increases the gain of the first stage and the second gang of the pot increases the impedance of the second stage. This results in the signal pushing into the output valves evenly all the way up. It’s a real musician’s amplifier, so when you play softly you get glistening cleans, and when you dig in it crunches up into rich overdrive – all with the touch of your hands."- Ade Emsley, Technical Director

“The Dual Terror’s sounds are superbly defined, and it’s aimed at the ‘Brit’ sound genre that Orange practically invented. Combined with its extra power and steel-cased durability, the DT is a great choice for indie rock, classic rock and blues, which easily spans stage, studio and practice use.” - Total Guitar, May 2017