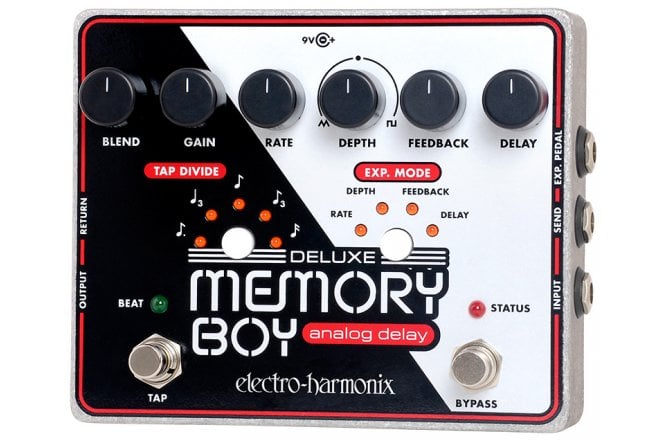 Code: DMBOY
In Stock Out of Stock | In Stock
Loading...
Delay Guitar Effects Pedal
Quality IC’s deliver warm and organic analog tones while “tap tempo” allows you to always be in sync with the groove
Choose five note divisions for metronomic variances
The Deluxe Memory Boy is the most flexible analog delay ever designed.
Need more information on the Electro Harmonix range? Call us on 01254 265212

The Deluxe Memory Boy is the newest delay from the Memory Man family. Quality IC’s deliver warm and organic analog tones while “tap tempo” allows you to always be in sync with the groove. Choose five note divisions for metronomic variances. Sweet modulations can be set while the expression pedal input gives you external control. The Deluxe Memory Boy is the most flexible analog delay ever designed.

In the studio or in performance The Deluxe Memory Boy will become a mainstay in your arsenal.

The DEPTH knob is also used to set the maximum amount of modulation for expression pedal control.

The DXMB has a low cut tone control feature which the RATE knob adjusts. Enter low cut mode by pressing and holding down the EXP. MODE button for 2 seconds. After two seconds, all of the EXP. MODE LEDs will light solid and you can release the button. At this point, the RATE knob no longer adjusts the rate of modulation but instead sets the frequency for the DXMB’s low cut filter. As you turn RATE clockwise, less bass will be present in the delayed signal. To completely bypass the low cut filter so that the full bass response comes through, turn the RATE knob down to the full counter-clockwise position. To exit low cut mode, press and release the EXP. MODE button. The DXMB will save the low cut setting, even after power cycling, and it will remain at that setting until adjusted again. The default setting from the factory is for the low cut filter to be bypassed.

GAIN Knob — Sets the input gain for the DXMB. As you turn the GAIN knob clockwise, the input gain will increase. The total gain range is -6 dB to +20 dB. The gain block is the first stage that the input signal goes through in the circuit. Both the dry and wet signals mixed by the BLEND knob go through the gain block.

BLEND Knob — The BLEND knob is a wet/dry control allowing you to vary the mix between direct and delayed signals at the OUTPUT jack of the DXMB. Set the BLEND knob to the full clockwise position for an output that is 100% wet. Set the Blend knob to full counter-clockwise for an output that is 100% dry. Setting BLEND anywhere in between will mix the wet and dry signals together.

TAP DIVIDE Button and LEDs— This button cycles through the six possible settings for TAP DIVIDE. Each setting, except when all LEDS are off, will divide the tap tempo to create shorter delay times in sync with your original tempo. It works like so: The DXMB always assumes that the musician taps in a quarter note. That quarter note can then be divided down to five other types of notes: dotted eighth note, quarter note triplet, eighth note, eighth note triplet and sixteenth note. The sixth mode is quarter note or OFF, where the tap tempo is not divided down and the delay time is set to your actual tap time. No LEDs are lit when Tap Divide is set to quarter note/OFF.

The TAP DIVIDE button setting is saved and recalled when power cycling.

TAP DIVIDE SEQUENCE MODE— The DXMB contains a little easter egg called Tap Divide Sequence mode. In this mode, the DXMB will automatically cycle through the six tap divide modes at a rate set by the RATE knob. To use this mode, do the following:

1. Tap in a delay time. Tap Divide Sequence mode will not work if the delay time is set by the DELAY knob.

3. Turn the RATE knob to change the speed of the sequence. You should see the tap divide LEDs light up in a sequential fashion.

4. You can tap in new delay times to change the delay time range.

5. To exit Tap Divide Sequence mode: hold down the TAP DIVIDE button for another 2 seconds. All 5 LEDs will light briefly to indicate you have exited sequence mode. You could also simply turn the DELAY knob.

LOW CUT MODE — The EXP. MODE button is also used to enter and exit low cut mode. Low cut mode places a high pass filter after the bucket brigades in the delay section to remove bass or low frequencies from the delayed signal. To enter low cut mode, press and hold the EXP.

MODE button for 2 seconds. All four Exp. Mode LEDs will light up indicating that you are in low cut mode. Now you can release the button. Use the RATE knob to adjust the amount of bass roll-off in the wet signal; as you turn RATE clockwise you will hear less bass. Turning the RATE knob to full counter-clockwise completely bypasses low cut mode. The factory default setting bypasses low cut mode. To exit low cut mode, press and release the EXP. MODE button, it will return you to the previous expression mode setting while saving the new low cut setting. The low cut mode setting is also saved and recalled when power cycling the DXMB.