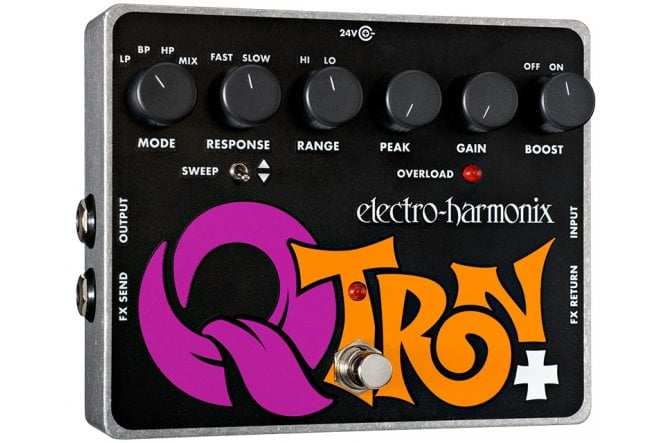 Code: Q-TRON+
In Stock Out of Stock | In Stock
Loading...

Same design as the original Q-Tron but with extremely useful Effects Loop and an Attack Response Switch.


The Effects Loop gives the musician the ability to place an additional effect, or chain of effects between the Q-Tron Plus's preamp and filter section without changing the envelope drive. This is particularly important with most distortion devices, as most all do not have much of an amplitude envelope. The FX loop will also fire up your creative juices to try all sorts of combinations in the effects loop: try the Micro POG into a Deluxe Memory Man. You can invent all sorts of novel effects.

The added Response Switch selects between a slow, smooth, vowel-like attack and the fast, snaked response of the original Q-Tron.

Boost Switch (Normal/Boost) - Normal mode passes input signal through the filter at its original level. Boost mode increases the signal gain to the filter according to the Gain control setting.

Drive Switch (Up/Down) - Selects the direction of the filter sweep.

Peak Control (0-11) - Determines the resonance peak or Q of the filter. Turning the control clockwise increases the Q and creates a more dramatic effect.

Bypass Switch (In/Out) - Toggles between effect mode and True Bypass. When the Q-Tron+ in bypass the effect loops is also bypassed.

Your Playing Dynamics - The Q-tron’s effect is controlled by the user’s player dynamics. strong attack will yield a more dramatic effect, while a softer playing yields more subtle ones.

The Effects loop allows you to place an additional musical effect between the Q-Tron’s preamp and filter sections without any alteration of the envelope drive. This allows the full dynamic response to your playing while greatly increasing the sound possibilities: Fuzz, soft distortion, echo and chorus, octave divider etc.

Effects Out Jack - Output to amplifier. The output impedance is 250 (.

Your Q-Tron+ comes equipped with a 24 volt DC (inner positive) / 100mA external power adapter. Use only the power adapter that is supplied! Using the wrong adapter can cause serious bodily injury and may damage your unit. This will void the warranty.


Set all controls to minimum. Connect your instrument to the input jack and your amplifier to the effect out jack. Optionally connect an external effect to the Effects Loop. The Unit’s power LED should be lit. Set the Q-Tron’s controls to the following:

* Vary the gain control until the Overload Indicator LED lights on the loudest notes that you play. If no effect is noticeable, depress the Bypass switch to engage the effect. With this setting the user should be able to approximate the sound of an automatic wah-wah pedal.

Experiment with these settings to see how the Q-Tron reacts to playing dynamics. Adjusting the Gain and Peak controls will vary the amount and intensity of the effect. For tonal variations adjust the Range, Mode and Drive controls.

To attain an effect similar to an original Mu-Tron III, set the Q-Tron’s controls to the following:

* Vary the gain control until the Overload Indicator LED lights on the loudest notes that you play. Increasing gain will saturate the Filter, yielding the famous “chewy” Mu-Tron like sounds. Adjusting the peak control will vary the intensity of the effect. For tonal variations, adjust the Range, Mode and Drive controls.

The Q-Tron+ can be used with a wide variety of electronic instruments. Here are some setting tips for use with different instrument types.

Drive Switch: Down drive works well with Bass guitar. Up Drive is best with guitar and keyboards.

The Q-Tron+ can also be used in conjunction with other effects pedals. Here are some interesting combinations.


Q-Tron+ and Big Muff (or tube amp distortion) - Place the distortion device after the Q-tron+ in the signal chain, or effects loop. The use of distortion will dramatically increase the intensity of the Q-Tron’s effect. You can also place the distortion before the Q-Tron+ but this combination tends to flatten the dynamic response range of the effect.

Q-Tron+ into a Q-Tron+ - (or another Q-Tron in effects loop) - Try this with one unit in the up drive position and the other in the down drive position.

Q-Tron+ and Octave Multiplexer - Place the octave divider before the Q-Tron+ in the signal chain or in the effects loop. Use an octave divider, which maintains the natural envelope of the signal. This combination will yield sounds similar to and analog synthesizer.

Try experimenting with other effects and effect placement (before Q-Tron+ or after it in the effects loop) to achieve your own unique sound. When used properly the Q-tron will provide a lifetime of playing pleasure.