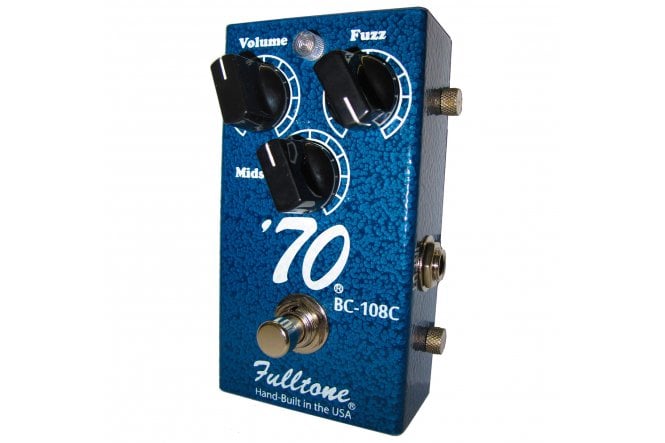 Code: FULL70
In Stock Out of Stock | In Stock
Order within for delivery on Wednesday 25th May
Loading...


Ever played an original FuzzFace from around 1970? (HINT: Not AT ALL the same sound as ones with the same namesake being mass-produced currently.) Ours has two intentionally mismatched (for harmonic content) silicon transistors that snarl and spit... not for the meek! If you put the "Fuzz" on 10 you will rip, and you might get all sorts of oscillation and weirdness... but that's Rock. Don't try using it with a wah wah... you can't, and neither could Jimi, without it screaming and howling. You want polite and quiet? Go elsewhere. You want art in a box? Come on in.

Housed in a 16 gauge steel box and powder coated deep blue, this pedal is a bit unruly but with some warmth... ideal for older 4 input Marshall amps, it has much more FUZZ than the '69 Pedal and includes a Mid control for extra clarity and cut.

I got my hands on Eric Johnson's Blue Fuzzface that he used from Tones through Ah Via Musicom period (now owned by Ian Moore) and incorporated a few of its tonal secrets into the '70 pedal with staggering sonic results!

VOLUME knob: This controls the overall volume level when the pedal is turned ON.

MIDS knob:
As you turn this knob Clockwise (CW) Midrange and gain is added...I like this knob somewhere around 12’oclock. The Mids knob allows you to fine-tune to your guitar/amp configuration and cut through in a live band situation, something the original Fuzzface cannot do. You'll find a "sweet-spot" where the notes want to sustain.. stock Fuzzface sounds are located with this “Mid” knob Fully counter-clockwise. (CCW)

FUZZ knob:
Turning this CW increases the amount of distortion and sustain. Like the original Fuzzface, nothing much happens until this knob gets to about 3 o’clock, and most of the gain comes on at the very end of the CW motion.

NOTE:
there may be some crackling noises while turning the “Mid” and “Gain” Pots...this is normal so don’t worry.

Internal BIAS Trimmer:
There’s an internal trimmer (pre-set by us) that affects the pedal’s response and varies the feel from soft to firm, as well as overall compression and transient response...feel free to experiment with this trimmer as there is no right or wrong

Power & Battery: This pedal is fitted with a DC jack (2.1mm shaft) for use with a power supply (not included, but we recommend our FPS-1) Always use a “regulated” power supply with Negative (-) to center pin...you may use any DC voltage from 5 to 18 volts, although 9 volts DC is the standard

This is what Mike Fullerton says about the pedal:

Vintage Fuzzface pedals are a favorite of many artists from the ‘60’s, ‘70’s, and beyond, used most notably by one James Marshall “Jimi” Hendrix to get a staggering array of clean and bombastic sounds...all depending on where the guitar’s volume knob was set. There were basically two versions of the Fuzzface: the earlier “Arbiter” Fuzzface (with Germanium NKT275 transistors) and the later “Dallas Arbiter” Fuzz-face. (with silicon BC183L and BC108-C transistors)The nastier, more distorted, BC108-C Fuzzface came out around 1970, and it inspired both the circuit and the name of your new Fulltone 70 pedal.

In my 20’s, I spent much of my time scouring the country finding these old vintage effects that nobody seemed to want. Many of them were broken, some sounded like God, and some sounded like crap. I couldn't believe people would pay $1000 for an original Fuzzface when the sound consistency was so hit-or-miss, so I started learning exactly what made the occasional one “magical.” This eventually led to the birth of Fulltone: vintage style tones with more flexibility, more reliability, better quality, true-bypass switching w/ LED status, a DC power outlet, and at a price that was as much as 1/10th that of the original.

The 70 pedal was the 3rd or 4th release from Fulltone. Debuting in 1994 and was the quintessential version of a 1970-1973 silicon transistor "vintage Fuzzface clone.” For some reason I designed the 70 into a ridiculously large enclosure considering how simple the circuit is, but it was a fairly popular pedal in my line, considering most people don’t know how to use fuzzes.

The 70 sold around 4400 units during the next 15 years, using various transistors including BC183L, ECG199, 2SC828, and (my favorite) the BC108-C. At some point early along the way I added the "Mid" knob which, for the first time, allowed a silicon Fuzzface-style pedal to cut through the mix...along with the internal Bias trimmer to allow the user to get softer or harder-edged tones.

Recently I found a huge stash of my favorite Silicon transistors for this circuit, the BC-108C, so I have reintroduced the 70 in a smaller enclosure, with our proprietary "anti-pop" quiet switching circuit, better power supply filtering for less noise, and polar-ity protection to keep you from frying the Transistors. I hope you enjoy it or that is pushes you into some new musical direction...that’s the magic of fuzz!