X
This site uses cookies to provide and improve your shopping experience. If you want to benefit from this improved service, please opt-in. Cookies Page.
Accept Cookies
Free UK delivery over £199
Seen It Cheaper? Get In Touch
Finance Available (Selected Items. Subject to Status) 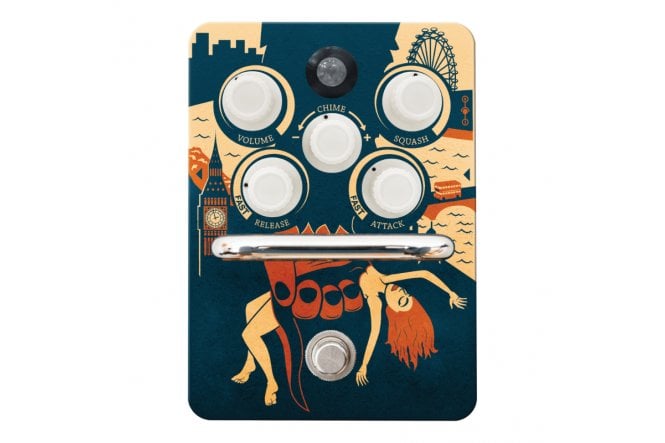 Code: PD-KONGPRESSOR
In Stock Out of Stock   |   In Stock
Loading...

"The awesomely named Orange Kongpressor is the result of years worth or research and development. The legendary British amp company never release anything that they're not completely happy with and it's easy to see why they're so proud of this pedal. Aside from its great aesthetic, the pedal performs like a studio style compressor, allowing you to adjust how quickly the pedal affects the input not only on the way in, but on the way out too.

What Ade Emsley (Orange's Technical Director) says makes the Kongpressor different from other compressors on the market, is the release bloom - it's smooth, like you find with some high quality studio compressors, plus you can adjust the settings to get it just how you want. The Orange Kongpressor also features a Chime knob to dial in a little extra high end sparkle to your tone, plus the pedal can also be used as a clean boost. The Kongpressor is a great way of adding some more sustain without having to discolour your tone with more gain. It's also a fantastic pedal for when you're playing a lot of short staccato notes in quick succession - it helps keep everything nice and clear, as well as adding bit of extra tightness to the bottom end. The Orange Kongpressor has an internal charge pump which doubles your 9v to 18v, giving you more clean headroom so no matter how big a signal is going into the pedal, it still works smoothly and seamlessly.

Compressor pedals help make notes that can get lost, stand out when they should, and reduce signal peaks. They're also a way of adding an extra dimension to your tone. The Orange Kongpressor does all of this wonderfully, without taking anything from your original tone. So, whether you're adding sustain to notes and chords, or using it to give some extra punch to your funk or country playing, you're not going to want to switch it off!"

So Good, You Won't Want to Switch It Off

The Kongpressor is an analogue Class A compression pedal which adds a stunning three dimensional quality to any rig. The pedal takes its inspiration from some of the world's most iconic vintage optical studio units, employing a re-issue of the famous vactrol VTL5C3 optocoupler that was responsible for the sound heard on countless hit records.

At lower compression levels the Kongpressor's effect is transparent but somehow fattening. It adds mojo and a glossy sheen to your core tone that you'll truly miss when it's bypassed. Even at extreme settings, the tone always remains musical with great feel under the fingers.

With controls for attack and release time, the Kongpressor can be tweaked to fine tune the transients and the bloom. We worked hard to make these parameters as forgiving as possible whilst still allowing players full control over the compression response. The pedal's internal charge pump doubles the headroom of the unit, so however the dials are set, the compression tracks seamlessly and remains clean across its range. There's also an active treble control for adding in extra chime and jangle, making the compression even more transparent. So whether you are new to compression or a seasoned studio user, it's impossible to get a bad sound from this comp.

Of course it's outstanding for crystal clean country pickin', but the Kongpressor also maintains the bottom end that seems to gets lost in many compression pedals. This means it behaves impeccably with overdrive pedals or the lead channel of your amplifier, adding fullness and sustain.

With up to 12dB of clean gain available on the Volume control, the Kongpressor works brilliantly as a transparent clean boost pedal, but with a little extra 'something'. With the compression turned up, your lead lines will cut through the band with plenty of fat, singing sustain.

Like all Orange pedal's, the Kongpressor features an internal charge pump which doubles the operating voltage of the pedal to 18V. This has the effect of drastically increasing the headroom for super clean compression. The Kongpressor can be powered by 9V battery or standard DC adapter, or for even more output can also run on 12V DC.

The Kongpressor's bypass features an ultra-linear buffer which retains your guitar's upper harmonic content when the pedal is switched off. Maintain tonal integrity even with long cable runs and large pedalboards.

"One of the things I didn't like about some of the existing compressors out there was the fact that the release bloom was not smooth. The bloom is one of the main things that give a compressor it's character and playing appeal. I found this to be the case with any of the FET compressors I tried and also some opto comps.


I designed the kongpressor using a special floating sidechain design that I had not seen used before so the next hurdle was to find someone who could make a fully RoHS compliant optocoupler as I knew this was the method I wanted to use. This took two years!


The result is a very smooth and transparent compressor that can take massive signals at the input and still remain clean. You can even hang the kongpressor out of a mixing desk or place it after a mic pre for studio use."