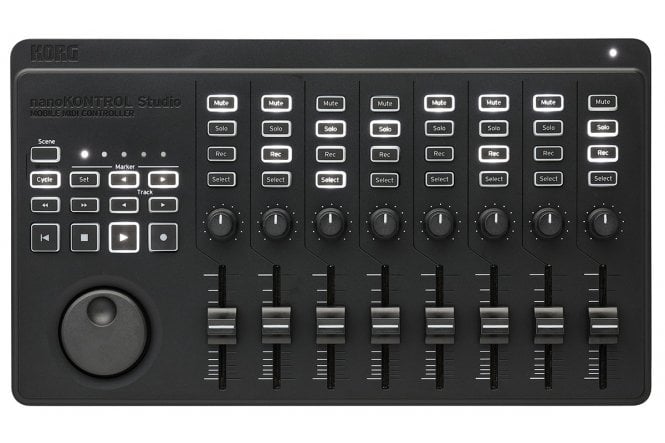 Code: NANOKTRL-ST
In Stock Out of Stock | In Stock
Loading...

The perfect size for intuitively controlling your music. A physical MIDI controller that you can use via USB or wirelessly.


The nanoKONTROL Studio provides transport keys and a mixer section, giving you stress-free control of your DAW or DJ software. It is battery operated and can connect wirelessly with your iPhone/iPad or Mac/Windows. It’s a light-weight, compact mobile MIDI controller that lets you create music more intuitively than ever.


Smaller than a letter-sized sheet of paper, the nanoKONTROL Studio is designed for thinness. It’s the perfect size to easily carry in a bag and use with your computer. In spite of its compact size, its controllers provide generous power and a solid feel, making it a convenient and versatile MIDI controller.


The nanoKONTROL Studio connect not only via USB but also wirelessly. It can easily connect to iPad/iPhone music apps such as KORG Gadget and Apple GarageBand, or to your Mac/Windows music production software. Freed from annoying cables, you can set up your equipment easily and efficiently. Due to careful tuning, you can enjoy low latency and high stability. KORG Gadget has a special native mode exclusively for the nanoKONTROL Studio. Simply by connecting with KORG Gadget, the most appropriate controls for MIDI assignment are completed automatically.


The simple, refined, and stylish design features illumination with beautiful white LEDs. The design has been modernized to use alongside new devices such as your laptop, tablet, or smartphone.

A full array of controllers that cover everything from DAW control to DJ performance.


You have the all controllers you need to operate your DAW: sliders that feature generous spacing and stroke, plus a convenient jog wheel. Whether you’re controlling your DAW and plug-ins, or putting on a performance, the nanoKONTROL Studio provides everything you need in any situation.

The nanoKONTROL Studio is compatible with any software that supports MIDI control change, including Reason, FL STUDIO, Tracktor, etc,.


The proprietary KORG BLE-MIDI Driver now allows fast and simple wireless connection between your Windows PC and KORG Bluetooth enabled keyboard (such as the nanoSTUDIO series and microKEY Air).

You can enjoy performing or producing music via an easy wireless connection not only from your iPhone/iPad or Mac, but also from your Windows PC. This is a powerful new addition to the Windows world and this driver works with Windows 8.1 and above.


The dedicated utility "Bluetooth MIDI Connect for Mac" allows fast and simple wireless connection between your Mac and KORG Bluetooth enabled keyboard (such as the nanoSTUDIO series and microKEY Air).
This greatly simplifies the sometimes troublesome process of establishing a wireless connection, letting you easily and quickly connect whenever you want.


"Bluetooth MIDI Connect" allows you to wirelessly connect your iPhone/iPad and KORG Bluetooth enabled keyboard (such as the nanoSTUDIO series and microKEY Air) even when using an app that does not support Bluetooth MIDI.
This enables wireless connection for any app that supports Core MIDI.

Approximately 10 hours (with the factory settings, when using alkaline batteries)

* Battery life will vary depending on the batteries used and on the conditions of use.

A computer that is running Windows 8.1 or later, and is equipped with Bluetooth 4.0